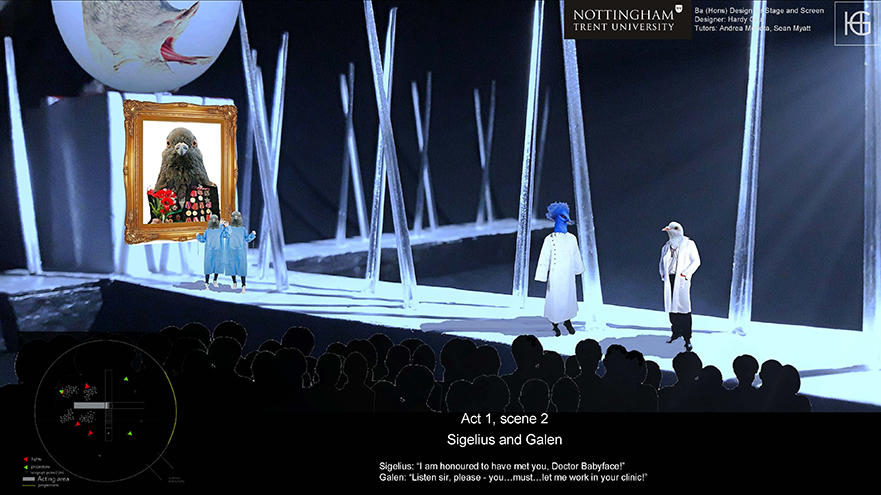 Hardy's design for The White Plague

BA (Hons) Design for Stage and Screen (Design for Theatre and Live Performance) student Hardy Gruduls has been selected for the international PQ STUDIO: Common Design Project Special Edition. The theatre design competition is based on The White Plague, a play by Czech playwright Karol Čapek. The competition has been organised by the Prague Quadrennial, in collaboration with Prague’s Arts and Theatre Institute (ATI).

The design task for this competition was integrated into the final year Speculative Design projects on the BA (Hons) Design for Stage and Screen (Design for Theatre and Live Performance) course. Six students were tasked with developing interpretations of Čapek’s play, in a site-specific performance, led by senior lecturers Andrea Moneta and Sean Myatt. The venue they were tasked with designing for was Willington Power Station near Derby, UK.

Hardy Gruduls has been selected to represent NTU at PQ STUDIO, and he has been shortlisted among 26 international design for performance courses. He took part in three days of on-line moderated discussion with leading practitioners Katrina Lindsay, Juli Balázs, Dr Dinesh Yadav, and Dr Hasan Zahirović, examining the play and proposed designs.

The selected designs, including Hardy, will have their work featured by the Art and Theatre Institute planned celebration of Capek’s work with an online gallery. Select projects may also be featured in Extras, a special section of peer-reviewed journal ArteActa.

Hardy told us more about his project: “The main inspiration for this design was Čapeks' as humanist’s struggle to understand the destructive nature of humankind, internal conflicts of human nature, fear and control. The task that I set to myself as a designer was to illustrate often surreal and absurd destructive nature of humanity, showing that we - humans - are white disease to our planet and ourselves, we are the plague. We all create our own dystopias.” 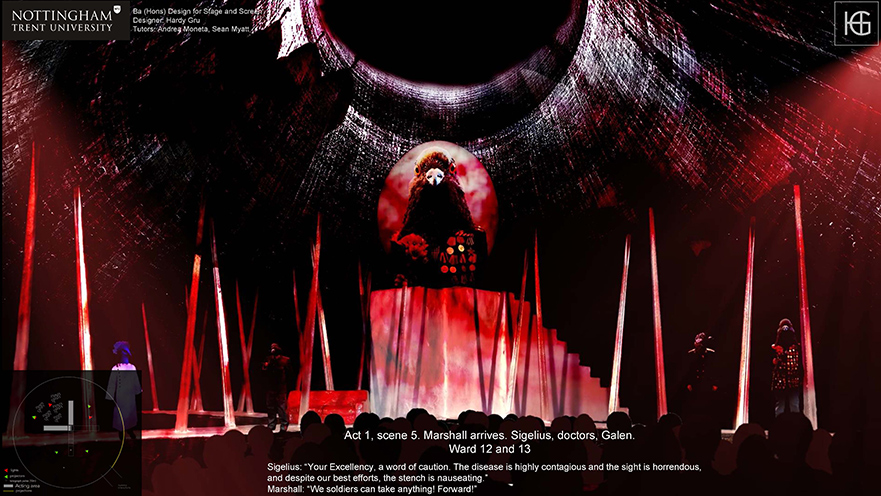 Hardy's design for The White Plague

“Equally inspiring was the site itself with the project being site-specific theatre. Willington Power station's abandoned cooling towers - empty cathedrals of power of the past, a timeless, cold, concrete nest taken over by birds creating a reality that is all too similar to ours.  It is an epic setting, that constrains audience in a huge yet claustrophobic space.”

When asked what he enjoyed most about this project, Hardy said: “I enjoyed applying the skills that I have learnt over the last few years and learning new ones in order to visually communicate my concept and ideas better, and to present it to tutors and cohort.”

Hardy told us how it feels to have been selected: “To be selected by tutors and then selected further by PQ artistic director and their team and receiving constructive and positive feedback from panel of internationally acclaimed designers and theatre professionals made me value my instinct and trust in my own artistic vision more, knowing that the design resonates. I appreciate that I had the opportunity to see my work alongside my peers work from around the world, letting me learn about different approaches.”

Senior lecturer Andrea Moneta commented on Hardy’s selection: “Hardy’s design successfully captured the essence of the play with a bold, operatic interpretation of it, wisely using the unique space of the Willington Cooling Tower, now populated by Hitchcockesque pigeons. Projections on the curved walls realized a totally immersive experience for the audience that, moving around the action, act as ‘clock hands’ of the performance. In his visualizations, Hardy depicted each scene with vibe and surreal power, and realized a video storyboard that also included original soundscape. Members of the Jury described his work as ‘really innovative, wonderful work’.”

You can see more of Hardy's work here: https://youtu.be/V_hNX7UJsHQ