Elle Bellwood and Gigi Rice will now go on to represent the UK at the Cannes Lions International Festival of Creativity. 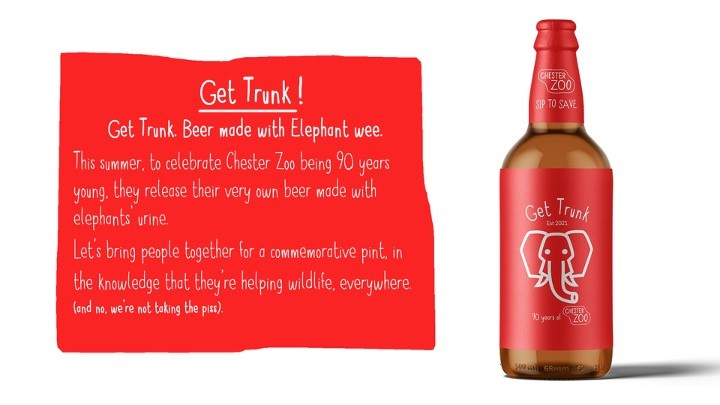 Elle Bellwood is a PR freelancer and Nottingham Trent University (NTU) alumna who studied BA (Hons) Fashion Communication and Promotion and graduated in 2019. Since graduating, she studied at the School of Communication Arts and met fellow creative Gigi Rice.

The duo have now been announced as the winners of the The Public Relations and Communications Association (PRCA) UK Young Lions PR competition 2021. They beat 50 teams to the prize, responding to a brief set by Chester Zoo.

Each team had 24 hours to create a new campaign for the zoo’s 90th birthday, to help drive sales. Elle and Gigi created and designed Chester Zoo’s own artisan beer, made from grains that were fertilised with the Zoo’s elephant urine.

Elle and Gigi will now represent the UK at the Cannes Lions International Festival of Creativity, a global event for the creative communications and advertising industry.

The winners said: "We'd like to thank the judges, the zoo, PRCA and all of the incredible people in the industry who have been supporting us, for this opportunity. We hope we have set an example for other young creatives who have also had a difficult year due to the pandemic, to hang in there and grab everything that comes your way. Fingers crossed we bring home a gold!"

When talking about her experience of NTU, Elle commented: “There are a lot of parallels between the course and the real world. The key thing Fashion Communication and Promotion taught me was the creative process. From insight to big idea and how to execute that idea. I still use that process every single day.”

The PRCA is the world’s largest professional PR body, representing over 35,000 PR professionals in 70 countries worldwide. PRCA director General Francis Ingham MPRCA said: “This is a remarkable achievement from Elle and Gigi having graduated only a year ago! The UK’s young talent was on full display across all of yesterday’s teams. Like so many young pros, the pandemic has made getting a career start difficult over the past 12 months. Thankfully Elle and Gigi stuck with it. And if I could give advice to any PR agencies out there – hire these two!”

The UK Young Lions Competition was sponsored by ICCO and PRovoke.

Senior Lecturer Simon Beales commented: “The Cannes Lions are one of the top global awards for creativity, so for Elle to win this, so soon after graduating and as a freelancer is fantastic. She spoke to our students recently and was so inspiring, so it’s great to see her continued success”

Since winning the award, Elle has been offered a position at Hope & Glory PR company.