Expert blog: Antisemitism and the attack on Ukraine 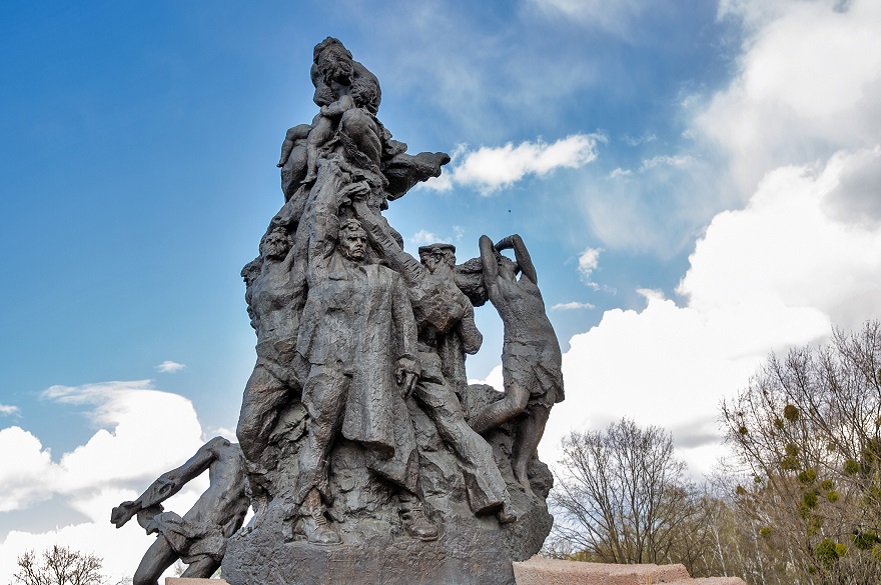 Expert blog: Antisemitism and the attack on Ukraine

In late September 1941, tens of thousands of Jews from the city of Kiev were rounded up by the Germans with the help of Ukrainian militia. They were taken to a place called Babyn Yar, meaning “grandmother’s ravine” in Ukrainian. Here, they were forced to strip before being shot by members of Einsatzgruppe C, Sonderkommando 4a, a Nazi death squad. Over 33,000 Jews were murdered. Following the slaughter, a few older Jews managed to return to Kiev where they sat for days and nights by the synagogue, traumatised, until they too were killed by a German guard.

The Babyn Yar massacre has come to represent what is known as the “Holocaust by bullets”. Around 1.5 million Ukrainian Jews were murdered between 1941 and 1944, the majority by gunfire. But it was not only Jews who were slaughtered at Babyn Yar. By the time the Soviets reached Kiev in late 1943, the Nazis had used the ravine for killing operations to which Roma, Soviet prisoners of war, Ukrainian nationalists, and priests (among others) fell victim. All in all, some 100,000 people met their deaths at Babyn Yar.

Babyn Yar continued to bring death. In March 1961, a huge landslide known as the Kurenivka mudslide resulted in mud and water pouring onto the streets of Kiev. Amongst the mud were human remains from Babyn Yar. The Soviet authorities had tried to bury Babyn Yar beneath a landfill. Then it was filled with liquid waste from nearby brick factories. The mudslide, according to official figures, caused 145 deaths, but the number could have been as high as 1,500 according to historian Oleksandr Anisimov.

Recently a Russian missile targeted at a TV tower at Babyn Yar killed at least five people and reportedly caused damage to the memorial park now located there. The first official memorial at the site was erected in 1976. It was dedicated to Soviet citizens. There was no mention of Jews. Then, after the collapse of the Soviet Union, new memorials were placed at Babyn Yar, recalling the various victim groups. Particularly well-known, now, is the memorial to the Jews in the form of a menorah. Only last year, a memorial centre was opened at Babyn Yar. That Putin’s forces should attack or at least allow collateral damage to the memorial site was immediately widely condemned. In the context of the Soviet Union’s long history of failing to acknowledge Jewish victimhood during the Holocaust, hiding it under the rubric of “Soviet citizens”, this seemed like yet another attempt to wipe out memory of the annihilation of the Jews. The irony of the situation was palpable. Putin had spoken of the need to defend Russia against the “humiliation and genocide” emanating from Ukraine, and hence to “demilitarize it and denazify it”. Yet here were his troops attacking a country whose president was Jewish, and three of whose great uncles were murdered in the Holocaust. Here were Russian troops doing violence to the sanctity of a memorial site commemorating Jews killed in a genocide. Following the news of the attack on the TV tower, Zelenskyy was quick to suggest that Russia itself was committing genocide. The attack in other words was not just one against memory of the Holocaust, but also a sign that the Holocaust was about to happen all over again. “To the world: what is the point of saying ‘never again’ for 80 years, if the world stays silent when a bomb drops on the same site as Babyn Yar?” he asked in a tweet. Even before this, Zelenskyy had called on the International Criminal Court to investigate the Russian attack as potentially genocidal, as well as criticising Russia for manipulating a claim of genocide against Ukraine to justify aggression.

Since the invasion of Ukraine, there have been reports of war crimes. The reckless Russian bombing of Ukrainian cities and civil infrastructure,  the failure to observe cease-fire agreements, the shelling of evacuees and the fatal deployment of cluster munitions (for instance at a preschool in Okhtyrka) have all been cited as evidence. In a statement of 28 February, the Prosecutor of the International Criminal Court, Karim Kahn, came to the conclusion after assessing the evidence that there “is a reasonable basis to believe that both alleged war crimes and crimes against humanity have been committed in Ukraine”. On 2 March, he then confirmed his Office would open an investigation into “into the situation in Ukraine from 21 November 2013 onwards, thereby encompassing within its scope any past and present allegations of war crimes, crimes against humanity or genocide committed on any part of the territory of Ukraine by any person”. While this brief would also seem to include an investigation of alleged crimes against humanity by Ukrainians as well as Russians in the contested areas of eastern Ukraine, the main focus is likely to be Russia’s current attack on Ukraine.

Whether or not one agrees that Russia’s actions in Ukraine may constitute genocide, or the beginnings of it, several things are clear. The first is that Zelenskyy is doing his best to expose Putin as a hypocrite, as someone who accuses others (without foundation) of genocide while acting in the spirit of genocide himself. Secondly, Zelenskyy is evoking the spectre of another Holocaust to try to galvanise the West into action by appealing to its moral code of “never again”. If this really is what the West is about, then surely it must act where “again” is in danger of occurring. Thirdly, Zelenskyy is identifying the fate of Jews in the Holocaust with the possible fate of Ukrainians in the present. This is perhaps the most interesting development. Babyn Yar has long been and still is a contested memory site. There are Ukrainian nationalists who would prefer to remember Babyn Yar as a site symbolising both Ukrainian suffering generally at the hands of the Nazis and the Soviets, and, more specifically, the “liberation struggle” waged by the Organization of Ukrainian Nationalists, notorious for collaborating with Nazism. Among those nationalists are those who resent the supposed “Jewish influence” behind the increased focus on the Holocaust at the site. In their minds, this is nothing more than a (Russian-driven) attempt to divert attention from “Judeo-Bolshevism”. Following the report that Babyn Yar had been attacked, Zelenskyy by contrast presented memory of what happened to the Jews as a focal point for Ukrainian empathy in their national struggle against Russia. 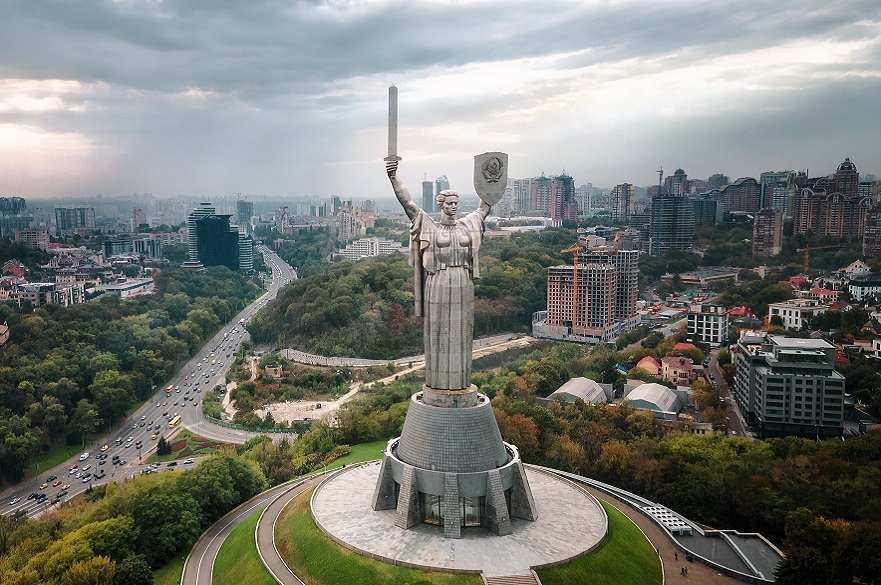 An image of Kyiv in Ukraine

And it is also clear that in understanding the present situation in Ukraine in terms of a “second Holocaust”, Zelenskyy is framing the struggle as a struggle against antisemitism. It has been claimed that, under Putin’s regime, the policies and attitudes of the Russian government have been relatively free of antisemitism. Putin’s relationship to Israel’s Prime Minister Naftali Bennett is reputedly good, and Bennett recently flew to Moscow to try to broker peace talks between Russia and Ukraine. But Putin’s meeting with Bennett could be interpreted as an attempt by Putin to undermine the impression of antisemitism created by his accusations of genocide against a country with a Jewish president. While Putin’s allegation was also probably directed at Ukraine’s conduct in the contested Donetsk and Luhansk regions, and particularly at the activities of the extremist Ukrainian Azov Battalion, he and other leading Russian politicians have long regarded Zelenskyy as an instrument or agent of a corrupt western world bent on bringing decay to eastern Europe.

In October 2020, Dmitry Medvedev, current Deputy Chairman of the Security Council of Russia, depicted Ukraine as a “vassal state of the US” and accused the Ukrainians of “losing their identity”. He went on to describe Zelenskyy as “disgusting, corrupt and faithless”, having repudiated his identity to serve Ukrainian nationalists. Zelenskyy, according to Medvedev, thus resembled a member of the Jewish Sonderkommando – the Jews forced by the Nazis to dispose of bodies in the gas chambers. In his recent televised address to the Russian people, Putin not only accused the Kiev government of genocide. In the context of a reference to Russia’s wars in the North Caucasus region (such as in Chechnya), he also condemned the West for allegedly seeking to force values on Russia which would “erode us from within”. Such attitudes lead to “degradation and degeneration, because they are contrary to human nature”. On the one hand, Putin justified the war against Ukraine by invoking fears of a NATO-led attack from the West comparable to Hitler’s attack on the Soviet Union. And on the other, he conjured up an image of accompanying cultural and moral decline associated in both Hitler’s and Stalin’s minds with the ostensible influence of Jews. For Hitler, bolshevism was Jewish. In the Soviet Union, any supposedly western ways of thinking were dismissed as the result of Jewish “cosmopolitanism”. Putin also subscribes to such antisemitic conspiracy theories.

In 2015 and 2016, the Democratic National Committee in the USA was subjected to cyber-attacks which were traced back to Russia. When Putin met Trump in Helsinki in July 2018, he effectively suggested that the Jewish Hungarian-American Holocaust survivor, billionaire and philanthropist George Soros might be behind the attacks. Soros is a frequent target of far-right hatred and white nationalism. Jason Stanley has pointed out that Putin sees himself as the “global leader of Christian nationalism”, which is hard, according to Stanley, to distinguish from fascism. In such a scenario, Jews appear as a threat. In eastern Europe generally, Soros is repeatedly accused of trying to undermine national interests. Hungary’s prime minister Viktor Orbán has conducted a campaign against Soros, who, he claims, is trying to bring in Muslim refugees to Hungary and subvert “Christian values”. At the same time, Soros is repeatedly accused of being a Nazi collaborator. Such accusations are designed to vilify Jews by suggesting the victims have become perpetrators, or indeed that they were never victims in the first place. In Putin’s mind, too, Jews are not only conspiratorial, but have linked arms with the fascist west.

At the time of writing this article, new reports were coming in suggesting that the memorial site was not, or only very slightly damaged after all. But this should not detract from the fact that the proximity of the site clearly did not prevent the Russian forces from firing rockets, which were probably aimed at the nearby TV tower. One should also not forget that the TV tower was erected in 1973 at the site of the former Jewish cemetery, where Jews were gathered together prior to the massacre, and which was largely removed in the 1960s. The greater significance of the assumed missile attack in any case goes beyond the question whether there was one or not. In the aftermath of the reports, the war of words between Ukraine and Russia escalated into one around the key issue of antisemitism and possible genocide, with Zelenskyy seeking to apply – in an ironic twist, perhaps – precisely the “cosmopolitan” morality that has become associated with western memory of the Holocaust. He evoked memory of the Holocaust to seek to activate greater awareness of human rights’ violations during the Russian campaign. But this is more than a war of words, because fears that Putin may seek to erase Ukraine from the map are not unfounded. Putin has never acknowledged the existence of a Ukrainian identity. His association of it with fascism, westernisation, corruption and liberalism must lead to concern that any attempt to create a russified Ukraine will involve repression on a grand scale. Cultural genocide, at the very least, is a real possibility.