As the country gears up to celebrate The Queen’s Platinum Jubilee, attentions may be turning to street parties, afternoon teas and hanging bunting.

It also provides us with a great opportunity to reflect on the significant events of the last 70 years, and to celebrate those that took place at Nottingham Trent University (NTU) and in Nottinghamshire.

Such a celebration is exactly what Barbara Matthews, NTU’s Executive Dean for Culture, was tasked with ahead of the Nottinghamshire County Show and it – quite literally – turned into a project of epic proportions.

The County Show, of which our Vice Chancellor was President this year, hosted a Platinum Jubilee community exhibition organised by Nottinghamshire County Council and the Lord Lieutenant's Office. Nottingham Trent University (NTU) was asked to contribute and so Barbara commissioned an enormous timeline showcasing key events that have taken place across Nottinghamshire during the Queen’s reign.

With the support of her team and graduate student Akanksha Gomes, Barbara sourced ideas from community groups across the county. Responses had to be diligently collated, researched and fact checked, and a selection was then used to create a brief for a visual timeline.

Who though, was best to deliver such a large-scale design?

Alumna Katerina Kerouli graduated from NTU in 2016 with a BA (Hons) in Graphic Design. She is now a freelance designer and illustrator who came highly recommended by NTU academics.

She was a fantastic fit for the brief and as Barbara told us, she “completely and utterly brought it to life”, creating a beautiful three-part banner which was suspended from the ceiling and formed the centrepiece for the exhibition.

She took inspiration from the long gallery at Buckingham Palace, walls adorned with pictures, and used this idea to frame the key events.

Katerina even added a design element that allowed visitors to interact with the piece for a quiz – a fun touch that really highlighted the project’s community theme. (Hint: spot the corgis!)

She told us about her experience of working with NTU on the project:

How did you feel when you were asked to be involved?

It was a great honour to get involved in the project and take part in representing NTU's contribution to the show. Having graduated from Graphic Design at NTU back in 2016, it felt like a project close to my heart and a great pleasure to illustrate key historical landmarks of Nottingham and Nottinghamshire.

What were the main challenges and most enjoyable parts of the project?

The most challenging part (in a good way) was scaling the illustrations and handwritten typography into such a large scale. It's the largest piece I've done yet – each banner was 6m long by 1.5m high – so it took a bit of thinking to figure out how we would display it.

The entire process was greatly enjoyable, but the highlights were probably researching archive imagery of Nottingham and illustrating parts of the city I used to spend time at as a student, such as Nottingham Contemporary, and the Arkwright building. I have a lot more appreciation for Rock City now as a music venue, after finding images from the 70s to 90s where fans were queueing for Nirvana and David Bowie shows. 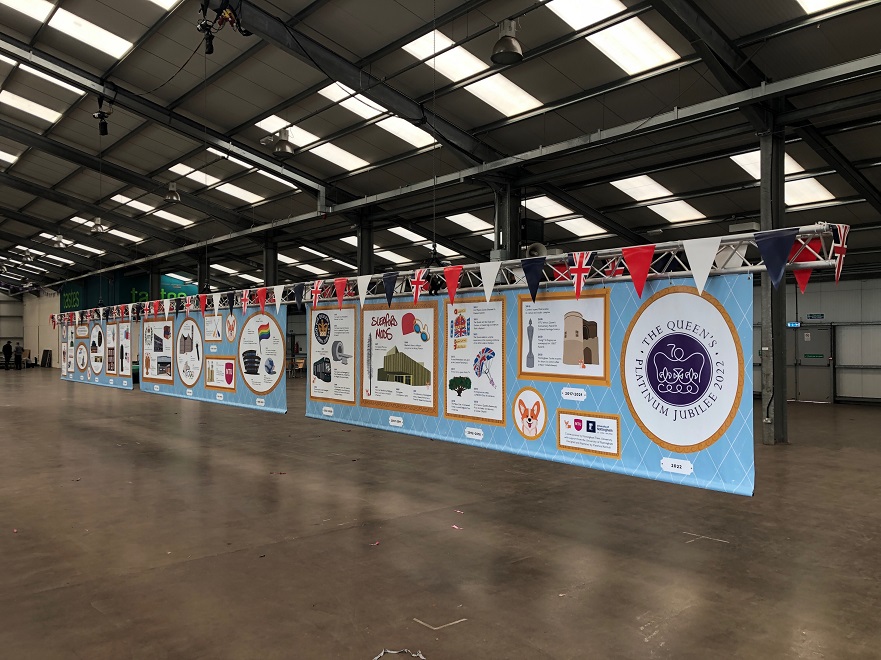 You attended the Nottinghamshire County Show – what were your interactions with visitors?

Although I was only there for a short period, it was lovely observing visitors of the show admiring the piece and seeing people of all ages spotting various parts of the timeline they associated themselves with.

The piece will now be displayed throughout the Jubilee year at other events hosted by the Lord Lieutenant of Nottinghamshire, Sir John Peace, who is also the Chancellor of NTU.

Following the event, the Vice Lord Lieutenant described Katerina as a “credit to the University” – and we couldn’t agree more.