The original Bramley apple tree has been chosen as part of a nationwide network of 70 Ancient Trees to be dedicated to The Queen in celebration of the Platinum Jubilee. 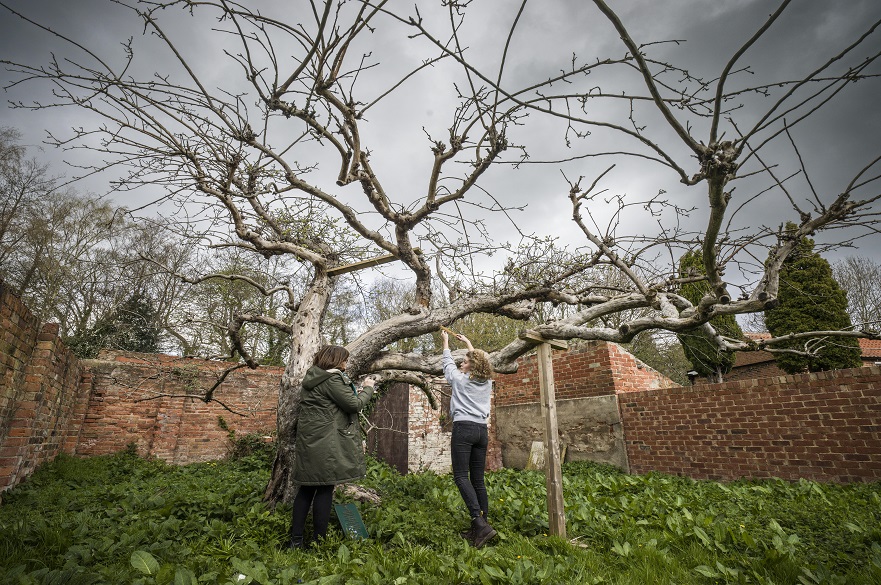 Nottingham Trent University is the custodian of the tree, which was grown from a pip more than 200 years ago in the town of Southwell, a short distance from the university’s Brackenhurst Campus.

The Queen’s Green Canopy has announced the network of 70 Ancient Woodland and 70 Ancient Trees across the United Kingdom, which will form part of the Ancient Canopy to celebrate Her Majesty’s 70 years of service.

The initiative was launched by His Royal Highness The Prince of Wales, who is Patron of The Queen’s Green Canopy, under one of the Ancient Tree dedications - the old Sycamore located at Dumfries House in Scotland.

Mary Ann Brailsford planted the pip which grew into the original Bramley apple tree in the garden on Church Street between 1809-1815. More than 40 years later new occupier Matthew Bramley allowed local gardener Henry Merryweather to take cuttings from the tree to grow in his family’s nursery – provided they had the name ‘Bramley’s Seedling’.

The first recorded sale of a Bramley was on October 31, 1862, when Mr Merryweather sold three Bramley apples for two shillings.

Today there are more than 300 Bramley growers in England, with about 83,000 tonnes of the apples grown annually in the UK alone. The apples are very large and typically used in desserts.

The university – which became custodian of the tree after purchasing two cottages for student accommodation – closely monitors the condition of the tree.

It is very old for a fruit tree, has been infected with incurable honey fungus for many years and is slowly coming to the end of its natural life.

Nottingham Trent University Vice-Chancellor, Professor Edward Peck, said: “The Bramley apple is a much-loved part of our local and national heritage and it is fitting that the original tree has been acknowledged and celebrated in this way. NTU is proud to be custodian of the tree and the University will continue to engage with the local and wider community to promote the heritage and science of the Bramley apple.” About 83,000 tonnes of Bramley apples are grown annually in the UK alone (Image: Roger Payne DTMedia.co)

Julia Davies, Head of Environmental Science in Nottingham Trent University’s School of Animal, Rural and Environmental Sciences, said: “The original Bramley apple tree is a cherished symbol of Southwell and we are delighted that it has been selected to be part of this dedication.”

Established over hundreds of years, the chosen woodlands and trees represent the diverse canopy of the four nations and is a celebration of our living heritage. All the woodlands and trees have a story to tell. Some are famous specimens and others have a local significance.

These ancient natural spaces hold significance and meaning for so many people in many different ways. They are symbols of community pride, places to connect socially and vital spaces for health and wellbeing activities.

By sharing the stories behind the ancient woodlands and trees, as well as the incredible efforts that are made to protect them, The Queen’s Green Canopy aims to raise awareness of these treasured habitats and the importance of conserving them for future generations.