Fine Art alumnus Hugh Dichmont is an established teacher, writer, and performer. His website describes him as a ‘tiny writer, as illustrated by the actual-size photograph to my right, your left.’ It’s a clever and typically self-effacing line that makes you warm to Hugh very quickly. And we’ve boldly decided to re-use it here. 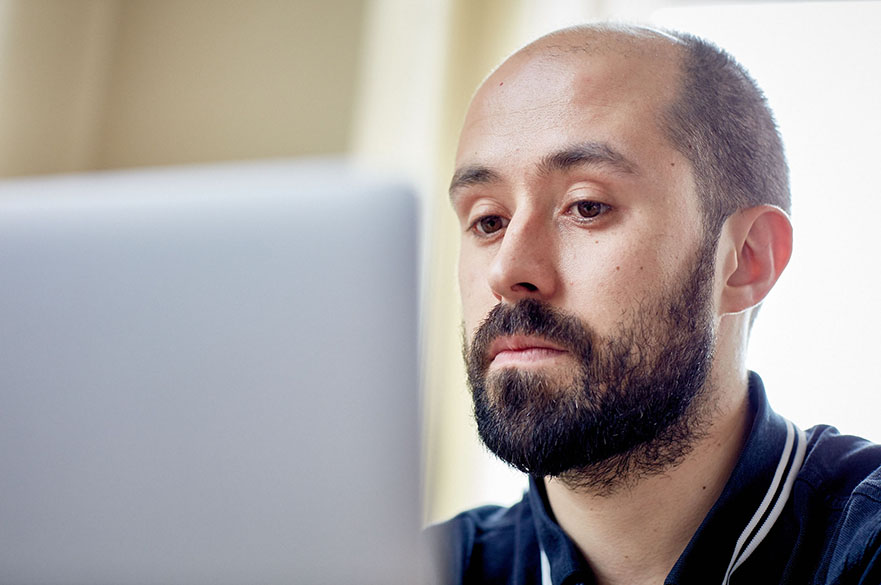 Hugh is all set to a deliver a ten-week creative writing course at NTU in October. But what does that involve, and how do you go from studying Fine Art, to becoming an award-winning comedy writer?

We emailed over a handle of questions to find out.

You studied Fine Art with us – and are coming back to NTU to deliver a ten-week comedy writing course. Is it fair to say your career has been “non-linear”?

“Yes, non-linear… that’s a friendly way to put it! I co-wrote my first play whilst studying at NTU, a Britain’s Got Talent-inspired farce set in heaven, which me and my course mates performed. It was a great time, making silly things with friends. I’ve tried to live my career with that same energy: fun first. If it makes me laugh, that’s at least one person who won’t be sending me angry tweets.”

We always ask, what are your memories of NTU? And did we set you on the right track?

“Playing with ideas, collaborating with others… Fine Art was a great environment to explore what it was I wanted to say, and how I wanted to say it.”

How did your career in writing comedy begin? It sounds like it might be quite a competitive industry?

“It began when I was six and said “posterior” to my friends and made them laugh. I don’t think I’ve hit the same highs since. And there is actually some truth in that – the biggest differences now is that I have less hair and sometimes get paid.”

What have been the highlights – and not-so highlights?

“Every time my writing becomes a thing (a play, a film, a podcast), it feels like a minor miracle. I’ve won a couple of awards along the way, but that feeling of ‘you’re only as good as your last script’ is what keeps me motivated. Playing with words is my reward (until I have successfully sold-out). Low-lights include not successfully selling-out yet, and that daily crippling urge to eat all the biscuits before sitting at my laptop.”

“As a child I was obsessed with The Simpsons and Ren & Stimpy, Red Dwarf and Whose Line Is It Anyway. Then came The Day Today and Brass Eye. I veer towards darker stuff; Peep Show, Camping. The Office, though, for me, is the pinnacle. I love the mix of pathos and observational comedy. Perfection.”

How did the opportunity to deliver the writing course come about, and what can people who are interested expect?

“I have been teaching in various guises for over a decade, but for the last few years I have been at universities, delivering mostly to BA and MA courses. I really love it. From this course people can expect an open, supportive atmosphere to explore their creativity. Really there will be no pressure to make anyone laugh! (We are writing, after all, not performing!) If you are curious about developing your interest in writing, then book yourself a place. We will watch stuff, talk a lot as a group, do lots of creative exercises, and finish the ten weeks with a short script you can be proud of!”

How can people find out more?