Changing gear: a cyclist going the extra mile to support our cancer research

Tony Pottle wanted to achieve three things: raise money for a worthy cause, do something out of respect for his close friends he’d lost to cancer, and hopefully get fitter in the process. 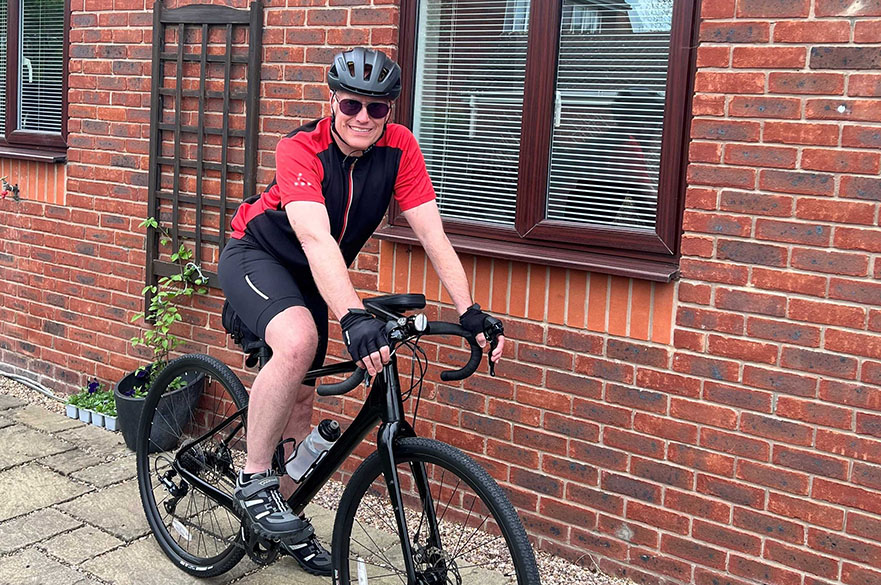 In May this year, Tony achieved his goals. He’d successfully completed a 100-mile cycle ride to raise funds for the John van Geest Cancer Research Centre.

It wasn’t without its challenges, but Tony had strong motivation.

“Cancer is something I have direct experience of,” Tony says. “My daughter Beth was diagnosed with lymphoma at the age of seven. Thankfully she made a full recovery, but over the past couple of years, I have lost some very good friends to cancer, so as an act of remembrance, and as a fundraising exercise for charity, I set myself a target of riding 100 miles on my own.

To an accomplished cyclist, a ride of 100 miles might sound achievable, but by his own (very) modest admission, Tony hadn’t had a great deal of practice.

“I’m 54 years old, overweight and two years ago I would have struggled to ride five miles,” he says. “But I’d been working on getting fitter since having been ‘locked-in’ during the first three months of the pandemic due to being classed as clinically vulnerable.”

Tony had originally planned a one-way trip from his home to the East Coast of England, but the thought of doing that solo, plus the risk of mechanical failure, required a slight re-think.

“In the end, the ride I chose was a ten-mile circuit around my nearby villages,” Tony says. “I put together a training and nutrition plan but at one point had a real nightmare of a ride and ‘hit the proverbial wall’. Thankfully, after a moment of clarity, I topped up my drinks bottles and headed straight back out there. I got to 90 miles and assumed the remaining ten would be easy. How wrong I was! Those last few miles were tough – but once I’d reached 100 miles felt completely elated.”

What made Tony choose to support The John van Geest Cancer Research Centre?

“I really wanted to take the four people whose memory I did the ride in and make a split between their chosen categories,” he says. “It sounds simple, but it was hard to find a charity fundraising page that allowed me to do that. I also felt the research centre team would put the funds to the best possible use.”

If you have been inspired by Tony to fundraise for The John van Geest Cancer Research Centre and would like to discuss ideas, please get in touch with our fundraising team.