Primarily constructed to protect the north-western frontier of the Roman Empire, Hadrian’s Wall is 73 miles long. In Emperor Hadrian’s day, it provided protection from enemies and played a key role as a strategic base for military units. Today, it’s a haven for those seeking world class archaeology, spectacular landscapes, and rare wildlife. 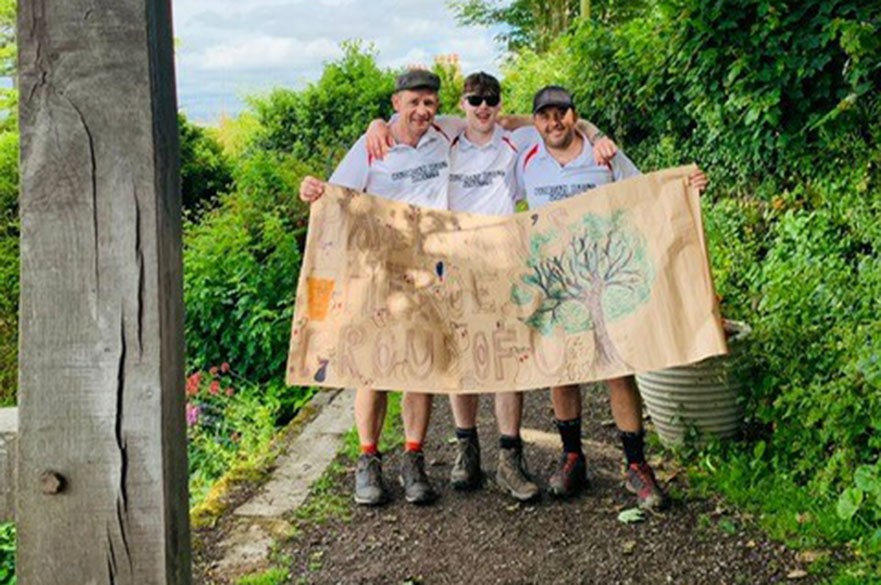 But it’s not without its physical challenges – especially if you decide to walk from end to end!

So why did Peter Besson, his son Tommy and friend Denys Osborn use it as a location to raise money for NTU and our research into the prevention and treatment of Alzheimer’s, Dementia and Parkinson's (ADP)?

“My father-in-law was recently diagnosed with Parkinson’s disease,” says Peter, “and my son’s girlfriend’s grandfather has dementia. I had arranged the walk for my son and me a few years ago before lockdown. COVID obviously put pay to our plans for the last two years, but finally when I mentioned it to my friend Denys, he was very eager to join us.”

So why Hadrian’s Wall? There’s no question it has historical significance, but was there a more personal reason to choose it?

The support of people on there – and those we met along the way – really kept us going, especially seeing the total amount raised increase day on day

“Three years ago,” says Peter, “another friend of mine and my son attempted the same walk. My friend sadly injured his back early on, which meant that they couldn’t complete it.  They were obviously disappointed, my son especially, so I promised him we would attempt the walk together the next year, but that was the first year of lockdown.

“Training and preparation for me was very lacking - apart from a couple of dog walks every day and a few longer walks to the pub in the next village at weekends!  We had planned the walk a long time in advance, but the time came upon us very quickly and the next thing we knew we were heading up on the train to Newcastle with our heavy backpacks.

“We planned the walk over five days. The first one out of Newcastle was a 21-miler to the Robin Hood inn at East Wallhouses – about two thirds of the way in. We faced a big climb up to Heddon-on-the-Wall, and what with 14kg of kit on our backs, that was gruelling.

“Thankfully the pub at the top was open and we had a well-earned drink before we set off for the last eight miles!  It wasn’t until the end of the second day we realised several companies were offering bag transfer between stops, so we took advantage for the last three days and I’m glad we did. The third day over the ’Crags’ was challenging but totally rewarding thanks to the views – spectacular!”

Blessed with good weather, Peter and his team covered 90 miles over the course of five days, finishing with a well-earned mini break in a cottage at the very end.

A key challenge to anyone trying to both raise funds and awareness is publicity. How did Peter keep his challenge fresh in the mind of his supporters?

“I made sure we posted a daily update on the mobile app Strava,” he says, “which linked with Facebook and Instagram. The support of people on there – and those we met along the way – really kept us going, especially seeing the total amount raised increase day on day.

If you’re considering taking on your own challenge to raise funds and awareness, does Peter have any lasting advice?

“Choose a charity that’s close to your heart,” he says, “one that really means something – this will spur you on.”

Have you been inspired to fundraise for a cause at NTU? Our Regular and Community Giving team are always on hand to answer any questions you might have and will support you every step of the way. Find out more.