Meet the NTU alum who has raised millions for charity

Nick Rusling set the wheels of his glittering career in sport and remarkable charitable achievements in motion while he was studying at NTU – he even met his wife here. Twenty-five years on, we caught up with this remarkable alum to hear how it all began, and where he’s heading next. 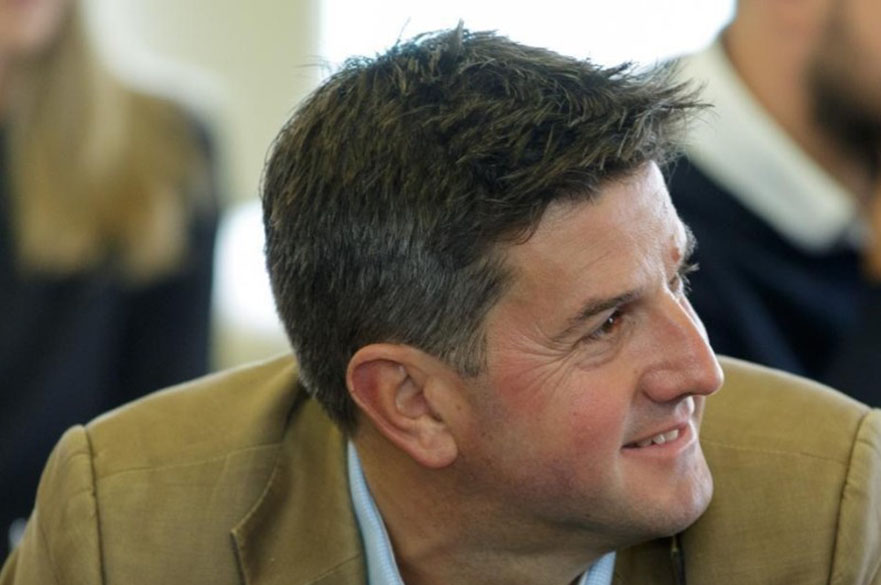 Graduating in 1997 with a degree in European Economics with French, Nick has been instrumental in raising over £150 million for charitable causes.

As CEO of events company Human Race (part of ASO, who also happen to own Tour de France), Nick and his team manage events involving running, cycling and triathlon. Royal Windsor Triathlon and the Manchester Marathon, to name a few. He’s also trustee at Women in Sport, encouraging more women and girls to enjoying sport and exercise, and Chair of the Mass Participation Sports (MSO) group.

Then there’s Nick’s role as co-chair of the 2.6 Challenge – a sporting initiative that raised £13 million for a world record number of charities during Covid 19.

I vividly remember being at Nottingham Trent and thinking – I need a job! – so wrote loads of letters to sports companies. As fortune would have it, one of them sent my CV on to the charity they worked with

He’s clearly achieved a lot in the 25 years since graduating. But first things first, what are his lasting memories of NTU?

“Undoubtedly those many hours practicing my moves on the dancefloor at Ritzy’s nightclub,” Nick says with a broad smile.

That’s not the answer we were expecting, but his funny and self-effacing tone makes you warm to Nick very quickly. It’s certainly easy to see why he’s inspired so many. But what’s been his key motivation? Philanthropy? Event management? Sport?

“I was always obsessed with sport,” he says emphatically. “I vividly remember being at Nottingham Trent and thinking – I need a job! – so wrote loads of letters to sports companies. As fortune would have it, one of them sent my CV on to the charity they worked with. They offered me a job, so that created the charity connection I would never lose. Then I worked for Ian Botham, who raised a lot of money for Leukaemia research by organising charity walks, and through that I became a sports agent for a while.

I got involved in organising mass participation events – the first being the London Triathlon. It was very early days with only 800 people, but it was there I built my love for getting people fit and healthy

“Being a sports agent for a while had its positives, but it dawned on me I didn’t really want to spend the rest of my life managing egos. By luck I got involved in organising mass participation events – the first being the London Triathlon. It was very early days with only 800 people, but it was there I built my love for getting people fit and healthy.”

It sounds a long way from life as an NTU and throwing shapes on Ritzy’s dancefloor. Is there anything he misses about being an undergraduate?

“In all seriousness, Ritzy’s was and still is significant because its where I first kissed my now wife," Nick says.

"It was the second week of the second year. We’ve been married for 18 years.”

Given Nick’s passion for promoting health and fitness, combined with his detailed knowledge of organising mass participation events, does he think we’ll see an increase of decrease in society’s willingness to get involved?

“It’s fascinating where we’re at. During the 2.6 Challenge, we focused on the country’s desire to connect and take part in charity events. What we’re finding now is, there’s been a significant behaviour change. People found new ways to do fitness, often quite local and community focused. They’ll find different ways to get fit – with friends, on screens.

"Parkrun is approximately 20 percent down on attendance. It’s something we in the events industry analysing deeply – but I feel human nature will prevail and people will return fully to the joys of sharing the same start and finish line with thousands of others.”

Connecting a challenge with a charity is what makes our country so special, there’s nothing like sending an email saying, ‘I’m doing a 5K run – please sponsor me

And the message he’d give to his undergraduate self?

“In terms of your career - don’t worry about feeling the need to have a gameplan,” Nick says. “Very few people hit the ground running when they graduate.  In terms of getting fit and active - I’m a big believer in goal setting. Once they’re set and you tell people about them, you’re on the hook a little bit – and that keeps you honest.  Connecting a challenge with a charity is what makes our country so special, there’s nothing like sending an email saying, ‘I’m doing a 5K run – please sponsor me’ – you’re committed and less likely to drop out of the process.”

Nick has decided to leave Human Race – a company he formed in 2010.

“I’m still CEO here in the UK, but it’s time for a change,” he says. “I really want to stay in sport and fitness but want to develop my knowledge around technology and data. I’m going to become MD of a company called Stepathlon.  We work with global sports clubs and events to get their fans fit and active – alongside other fans.  It can work in the entertainment industry also – music, fashion, celebrity.  Anyone with a huge fan community.  If there are NTU alum with a focus on data science and digital marketing I’d love to hear from you.”