Cressida Laywood, NTU alum and voluntary-sector champion, has won a Nottingham Award at the annual Goose Fair Dinner for her exceptional fundraising efforts and contributions to the charity sector. The Nottingham Awards are presented to a small number of outstanding individuals who have worked selflessly for others in Nottingham and made a profound impact on their lives. 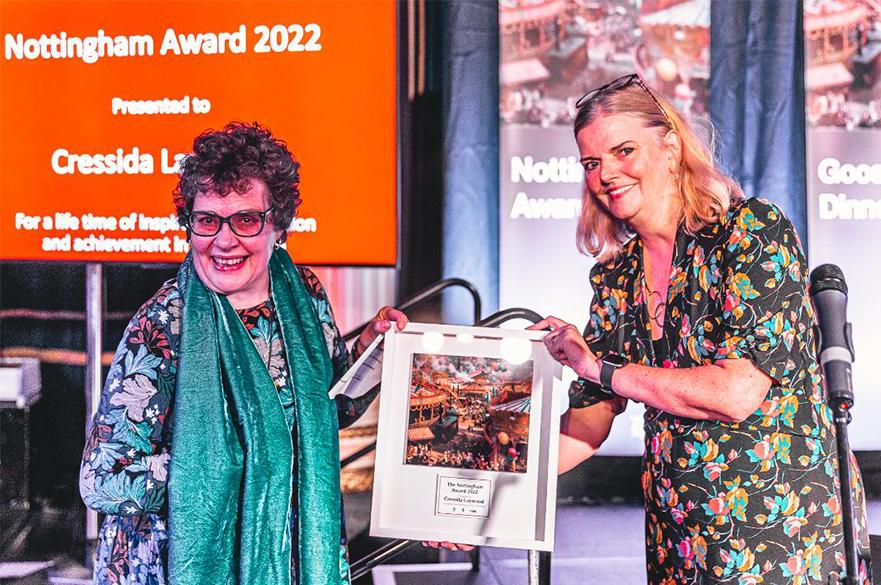 Cressida’s life took a terrifying and unexpected turn in September 1992, when she suffered a near-fatal brain haemorrhage. This led to her being partially paralysed and with a speech and language disability called Aphasia. The traumatic experience inspired Cressida to found Aphasia Nottingham, a support group to bring people together with the condition. It’s since been running for 28 years.

In the last ten years, Cressida has set herself many personal challenges. These have included sponsored bike rides, swims, walks and mini marathons. She’s raised over £15,000 for a variety of local charities.

Perhaps Cressida’s proudest achievement to date has been to raise £25,000 for Aphasia Nottingham. She’s also been busy raising awareness of Aphasia through media appearances, contributing to journals, and speaking at conferences both at home and abroad.

Receiving her prestigious Nottingham Award, Cressida said, "To be one of the four winners was amazing. I felt so touched and humbled. Getting the award was very special to me but I still have more to give!".

Cressida is no stranger to receiving awards. In 2003 she was the recipient of BBC Radio Nottingham and Nottingham Evening Post’s Reach Out Award. Other accolades include nominations for the Golden Citizen Award in 2002 and Life After Stroke Award in 1995.

Cressida studied Communications at NTU, or Trent Polytechnic, as it was known then. She graduated in 1985, before her brain haemorrhage and consequential Aphasia. When asked about how to overcome challenges, she talks about her Communications BA, saying “it made me want to improve my speech and language abilities after my trauma".

The whole experience of going to university widened my horizons even when I had such a serious trauma which changed my life in an instant.

For those considering how to be more inclusive of people living with Aphasia, Cressida has some useful advice. “Use pen and paper,” she says. “Say one thing at a time, don’t rush – slow down, be patient, draw diagrams or pictures. Relax - be natural, don’t pretend you understand, write down key words, recap often – check you both understand".