Girl skateboarders have shared their experiences of skateboarding spaces and interactions as part of a study, funded by the Leverhulme Trust, which explored what enables girls and young women to take up and stay in skateboarding, and what makes it harder for them.

These included feelings of belonging, escape and achievement, but also experiences of harassment, assault and public disapproval when skating in public spaces.

Led by researchers at Nottingham Trent University (NTU) with the University of Leeds and Skateboard GB, the National Governing Body for skateboarding, skaters were observed at three skateparks and skateboarding spaces in two large cities, one in the Midlands and the other in North-West England. Two were open public skateparks and one a managed park where people pay to skate.

The team mapped who used each skatepark at different times, what they did there and how the different individuals and groups interacted. The research also involved interviews with 42 girls and young women; a recording of a women and girls’ meeting in another skatepark; and 15 interviews with people involved in the local skateboarding scenes, such as young men skateboarders; girls who spend time in skate spaces but don’t skate; and skateboarding coaches.

Participants were all asked how their involvement in skateboarding started, their good and bad experiences with it, and what prevented them from skating.

The girls enjoyed the feeling of skateboarding, engaging with learning a new skill and finding new friends and spaces. They disliked the way some public authorities treat skateboarding outside of official skateparks as a form of antisocial behaviour, with this disapproval exacerbated by harassment from the public, such as bottles thrown under their boards and people jumping in front of them.

Young women also reported feeling uncomfortable in male dominated skateboarding spaces and often felt like they were ‘in the way’. They therefore tend to use skateparks at less busy times, especially early mornings, cutting sessions short if others arrive. Some young women only skate at official women and girl sessions in managed skateparks.

They discussed being undervalued as skaters and their abilities being questioned by male skaters. They also felt they had to ‘prove’ themselves as competent skateboarders immediately on arriving in a skateboarding space. However, some young women have founded communities in local areas and on social media which seek to make more space for them in skate spaces. 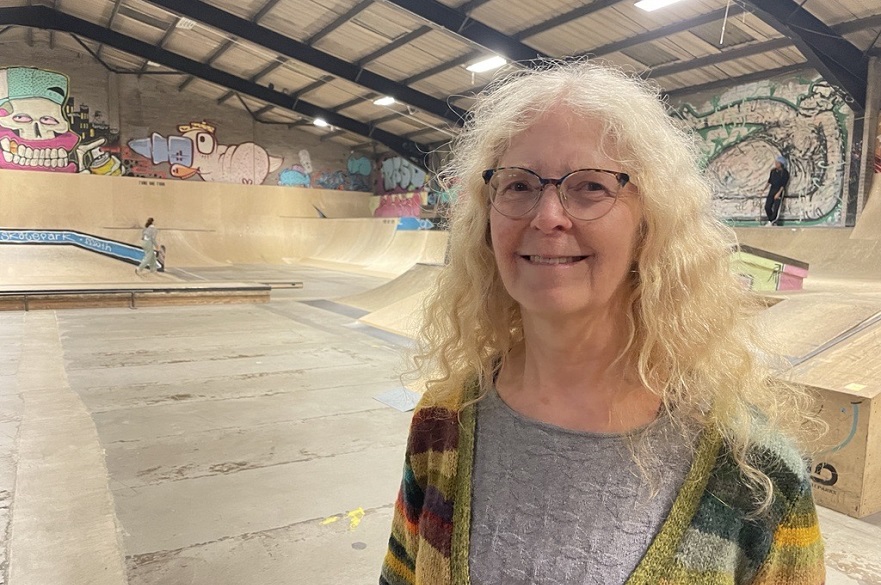 Lead researcher Professor Carrie Paechter, from NTU’s School of Social Sciences, said: “Listening to the experiences of female skaters it’s clear that formal skateboarding spaces need to be better designed so that there are quiet places for beginners to practice, relatively undisturbed by more confident or expert skateboarders. This would make it easier for young women to get started in the first place, as well as being more welcoming for older, younger, or differently-abled skaters of any gender.

“However, skateboarders and other skatepark users often have limited say over the design of skateparks. This means that we need to look at a process of negotiation, community organising, and activism to raise awareness among Local Government officers and elected members and to influence decisions.”

The study also suggests that skateboarding coaches could play an important role in tackling girls’ fear of being in the way when teaching – including challenging boys’ and young men’s behaviours and emphasising skatepark etiquette such as turn-taking and making space, as well as supporting girls to challenge male dominance and claim their right to skate.

Recommendations also include the introduction of more woman and girl sessions in managed skateparks, while remaining clear that these should not be seen as the only safe times that girls can skateboard.

Skateboard GB are currently working towards revised skatepark design and development guidance, which will include expanded content on how new facilities can be designed for greater inclusivity and accessibility. Although the guidance will be advisory with the onus remaining on local government to positively engage with skatepark users, this research is set to influence how skateparks and other spaces for skateboarding are developed and activated in the future, including a new ‘skate friendly’ public space in Nottingham which opens before Christmas.

Chris Lawton, Community Development Officer at Skateboard GB, co-founder of Skate Nottingham and a co-investigator in the research, said: “Skateboarding has changed radically in the last 5-10 years, both with the huge diversification of the skateboarding community by gender, age and ethnicity and also with the emergence of organised skateboarding provision in most UK towns and cities, alongside the informal, spontaneous activity that is the lifeblood of the sport and wider culture.

“Nottingham has been a leader in this space, both in the early take-up and delivery of organised women and girls’ sessions led by female coaches, which started in summer 2017 with Skate Nottingham’s delivery of the ParkLives programme with Nottingham City Council, and also with this internationally important research led by NTU. Skateboard GB will work closely with the research team to identify how a range of findings from the project can affect coaching and coach development, session delivery, skatepark design, support for community groups led by/working with women, girls and other marginalised genders, events, talent progression and safeguarding and the wider support of skateboarders’ development and wellbeing.”

The findings of the study have encouraged Nottingham’s Flo skatepark to increase its offering to skaters with weekly mid-week women-only sessions.

Megan McKay, Skate Coach at Flo Skatepark, said: “These women and girls’ sessions are really important because they give the skaters a space to grow in confidence and find their own feet without being intimidated by other users, because that’s a real issue for female skaters.”

Professor Paechter added: “We need to work on a general culture change. Our research suggests that young men generally welcome young women skateboarders – but they need some support in understanding how do that.”