Given the ongoing success of Table Cricket it is envisaged that this version could be just as successful by making the game accessible to the larger population of youngsters with a learning disability.

Target Cricket has now been adopted as the official England and Wales Cricket Board version of the game in appropriate contests for those youngsters with a learning disability who require ongoing support. Other more able youngsters (MLD) should of course participate in modified Kwik Cricket.

The game uses the traditional table tennis table and the established equipment for Table Cricket. In this version there are 'sliding targets' which indicate the value of the gaps in between the larger sliding fielders on the respective panels and, to give a focus for the batter, also act as targets. The following is a brief outline of the aim of the game.

Further information on the development of Target Cricket.

This game is for those schools, clubs, organisations or settings that provide educational, social, recreational or sporting opportunities for those individuals with mainly learning disabilities, i.e:

The two changes to the equipment are: 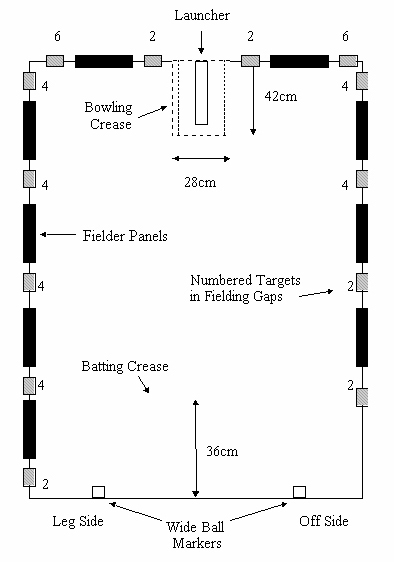 In principle these apply, however it will depend upon which rules version is being played – see the versions in the introduction.

Aspects a) to g) are not relevant.

Instead rule 7 - batting and scoring - aspects a), b) and c) should be used for appropriate 'classification' procedures.

Note rule 12 e) should also be applied in parallel for those competitions for youngsters with learning disabilities, i.e. some youngsters with 'potential' should be playing Kwik Cricket.

All apply. Some participants could eventually be coached to use the swing ball so they could play other forms of the game of Target Cricket.

People who are eligible

People who are not eligible

Two or four plastic sides can be screwed to a wooden batton, this can then be just slotted into two guide brackets fixed to the table side (DIY). This saves the use of clips or tape so youngsters can be independent.