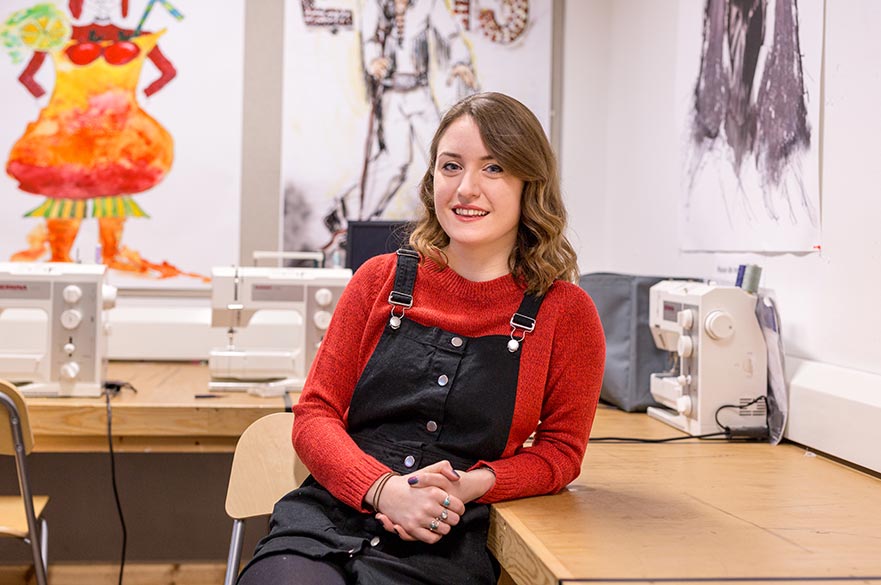 One of the reasons I chose NTU was the fact the course here offered the chance to spend an equal amount of time on designing and making.

Chloe graduated from our BA (Hons) Costume Design and Making course in 2016. Six months on we catch up to find out about her new job working on New Adventure’s dance spectacular The Red Shoes.

Can you tell us a little bit about the show you are currently working on?
“I’m working as a Wardrobe Assistant on Matthew Bourne's production of Red Shoes which is an adaption of the film directed and produced by Michael Powell and Emeric Pressburger. As the production is touring the UK, I help set up the show every Monday in each different city. On Tuesdays we meet with local dressers and discuss which costumes need to be used. Because of the cast rotation, you have to remember the personal preferences of each performer which is a lot of work!”

How does it feel like to be part of such a prestigious production?
“It’s a little surreal at times! You just get on with everything and it’s not until you tell someone what you’re up to and they are like “oh my god, well done” that I realise this is my life now!”

Can you tell us about some of the other professional work you’ve completed since graduating?
“I’ve worked on a few short films including a horror / thriller called Lucidity and another called Wash Club. I then started working for First Family Entertainment which is a Pantomime Production company in Nottingham for around three months. After that, I moved on to work on an actual pantomime show in Malvern which really helped me to develop my show experience.

“In the new year I worked on a future film which had already partly shot in Los Angeles called Madness in the Method, which included actors such as Vinnie Jones which was quite exciting! That was really great because I was left with lots of responsibility as the supervisor and designer were busy sourcing props for the next day's shoot. I spent the majority of my time on set making sure everything ran smoothly. Whilst I was doing that, I had the interview to work on The Red Shoes!”

What makes our BA (Hons) Costume Design and Making course stand out?
“One of the reasons I chose NTU was the fact the course offers the chance to spend an equal amount of time on designing and making.

“Also, the staff here are all so friendly and really do care about your progression. A majority of them are still in the industry so that means they can offer students opportunities, because they know people who are looking for assistants.”

How did your degree prepare you for industry?
“During the course we learned a variety of skills that can be applied to different roles. Also, we had lots of support about how to freelance. I went to a couple sessions ran by the University’s Employability Team which were very helpful and often involved previous graduates coming in and sharing their freelancing experience.”

What was your university highlight?
“When everything started coming together at the end of Final Year. It was then when I started to realise ‘yes I’m going to do this!’”

Do you have any advice for people thinking about studying Costume Design and Making?
“Get as much experience as possible whilst you’re at university and take every single opportunity that is offered to you. Meet as many people as you can in the industry and keep in contact with them."

What is your dream job?
“My dream was always to work in costume, and I am!"