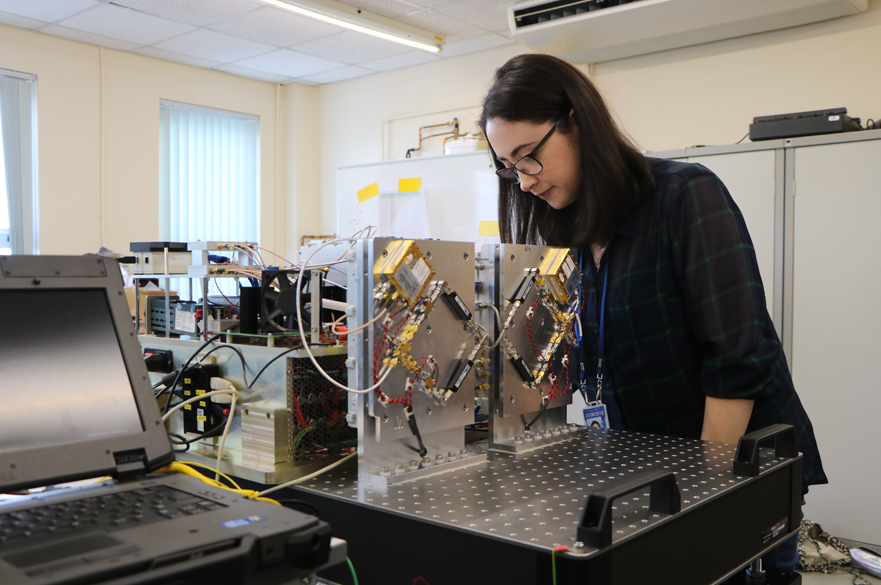 I would definitely recommend a work placement to other students. I’ve visited new places, met new people and gained new skills and knowledge.

I wanted to do a year-long placement so that I could find out what it would be like to work in science research. In my role, I’ve had the opportunity to work for a world leader in millimetre wave technology which has given me technical skills that I’ll be able to use in many aspects of my future career.

The main project that I’ve been working on as part of my placement is an Astronomical Systems, Technology and Engineering Collaboration (ASTEC). This project aims to design and develop an astronomical heterodyne receiver to be deployed at the Large Millimetre Telescope in Puebla, Mexico. As part of the project, I’ve been involved in designing, developing and assembling the instrument and its associated equipment. Our receiver called CHARM (collaborative heterodyne astronomical receiver for Mexico) will observe spectral lines in the interstellar medium and in young star forming regions.

The work that I’ve done on my placement year is very different to anything I’ve worked on during my course, but I’ve been able to bring useful transferable skills to my role, such as the basics of working in a lab, following health and safety rules and programming skills. I also gained a solid foundation in the basics of using a radio telescope by working with NTU’s 2.3m radio telescope in my first-year labs. I was able to apply my knowledge whilst working with the Large Millimetre telescope even though it’s about twenty times bigger in diameter!

I’m really honoured to have received the Patricia Tomkins Undergraduate Prize 2019 from the Royal Astronomical Society (RAS) for my work on developing the heterodyne receiver. I’m looking forward to presenting my work at the RAS and very grateful for my placement which has allowed me to work on such an amazing project. I enjoy the fact that I’ve contributed heavily to a scientific instrument that could go on to help us understand more about our universe.

My placement has broadened my horizons in terms of my future career as it has shown me the range of research that’s carried out across so many fields. I’ve seen the development of cutting-edge technology and research and it has confirmed my desire to work within physics and astronomy in the future.

I’ve really enjoyed my time at NTU so far studying BSc Physics with Astrophysics. I’ve recently decided to transfer to MSci Physics, giving me an extra year at NTU. I’ll spend half of that year working in one of the NTU research groups, applying what I learnt while on placement.