A new cartoon-style educational tool to help tackle the harassment of women and girls has been unveiled by experts from Nottingham’s two universities as part of a unique zero-tolerance strategy being pioneered throughout Nottinghamshire. 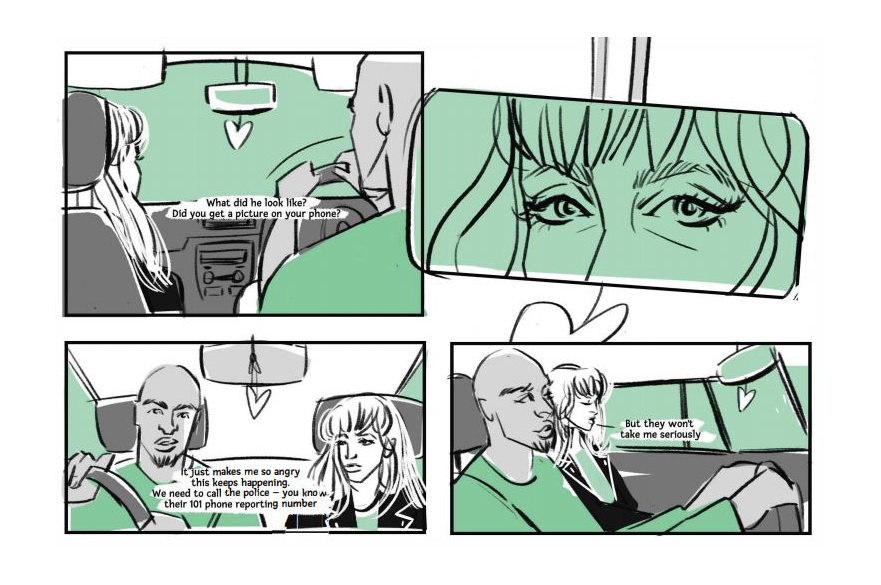 The graphic novel-style comic strip is called Changing Minds and has been created by language and criminology experts from Nottingham Trent University and the University of Nottingham, with a professional creative writer and comic producer.

The web-based cartoon aims to deliver a strong and accessible message about the real impact of harassment on the lives of women and girls in Nottingham city, county and beyond.

Nottinghamshire Police were famously the first force in the UK to make misogyny a recognised hate crime in 2016. A research report assessing the impact of this involved Dr Loretta Trickett, a criminologist from Nottingham Trent University (NTU), and Professor Louise Mullany, a linguistics expert from the University of Nottingham. The report showed that misogyny hate crime was highly prevalent but under reported, although a survey carried out during the research showed that:

The Nottingham Misogyny Hate Crime work has already influenced police and government policy, including the Upskirting Bill and more recently Dr Loretta Trickett and Professor Louise Mullany advised on the phrasing of the new Domestic Violence Bill currently going through Parliament. The Bill includes an amendment, based on the researchers’ linguistic advice, that will make misogyny a category of hate crime.

The Changing Minds comic is the latest part of a package of educational resources commissioned as part of the Misogyny Hate Crime Report published in 2018. This research showed that 87% of people questioned believed it was a good idea to make misogyny a hate crime in Nottinghamshire.

Nottingham-based graphic art company, Dawn of the Unread, run by NTU School of Art and Humanities' lecturer James Walker, has produced the comic with artist Kim Thompson. It is available online and as a free download.

Dr Loretta Trickett is an expert in criminal law and hate crime at Nottingham Law School. She said: “For too long women and girls have had to put up with harassment in public spaces from men which informs their fear of crime and impacts on their freedom of movement. It is incumbent upon all of us as a society to tackle the attitudes behind this kind of behaviour and we require men and boys to be part of the solution in eradicating these practices. This resource will help us to work with students in secondary schools, colleges, universities and beyond to achieve this objective.”

Professor Louise Mullany from the University of Nottingham’s School of English said: “The comics’ medium is a highly effective way of communicating these vital messages about the real-life impact of street harassment on women and girls, particularly to the minority of those men who feel peer pressure to behave like this in public spaces, including public transport. We are appealing to teachers, educators and community leaders to use this resource to initiate discussion and debate to change these persistent and damaging cultural practices.”

The former Chief Constable of Nottinghamshire Police, Susannah Fish OBE, said: “Working with men, and helping them understand the impact of street harassment on women, were key findings of Mullany and Trickett's research on Nottinghamshire Police introducing misogyny as a hate crime. The misogyny comic translates this evidence base in a creative and relevant way to raise this awareness, and actively engages men in the solution, including engaging them in the design and creation of the comic. By doing so, this creates a vital educational resource which can be used to shape, influence and change attitudes and behaviours.”

The Changing Minds comic was funded by Research England via the University of Nottingham’s Institute for Policy and Engagement in collaboration with Nottingham Citizens.