Nottingham Trent University (NTU) has been named ‘University of the Year’ by The Guardian. 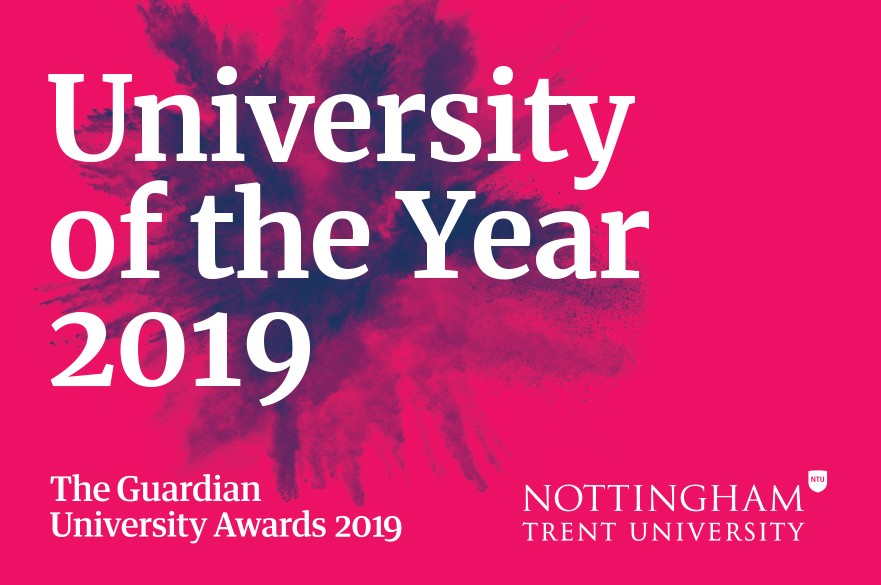 This represents another significant addition to the institution’s growing list of major accolades.

It also follows the University soaring to 16th place – a jump of 18 places – in the Guardian University Guide 2019. Crucially, this national league table focuses on student satisfaction, graduate employment, and quality of teaching.

As part of its ‘Success for All’ agenda, NTU strives to provide the opportunity for all students to succeed and is at the forefront of understanding and implementing what works to support students.

Nottingham Trent University Vice-Chancellor, Professor Edward Peck, said: “I want to thank The Guardian for recognising the achievements of NTU over recent years. My colleagues and our students set out our shared ambitions and challenging objectives back in 2015 and we have all worked incredibly hard to deliver these.”

Guardian University Guide editor, Judy Friedberg, said: “Nottingham Trent's performance across a range of measures has been exceptional this year. The university delivers overall academic excellence while paying close attention to the success of each individual student, no matter their background.”

NTU also won the Course and curriculum design category at the Guardian University Awards for its SCALE-UP project. Originally a small-scale idea trialled in the USA, NTU has enhanced and scaled-up this approach to teaching which turns its back on traditional lecture theatres and the student/teacher relationship and encourages students and lecturers to work more collaboratively in a roundtable environment.

This initiative has successfully reduced the attainment gap in underrepresented groups, and improved non-continuation rates across all groupings - so that all students now have a greater chance of obtaining a ‘good’ degree. For BME students specifically, the attainment gap reduced by 4.2%, attendance improved in the 90%-100% category by 13 percentage points and the non-continuation rate almost disappeared.

NTU was named Times Higher Education University of the Year 2017 due to its impressive record on outreach and its use of learning analytics to improve retention.

The University was also named Modern University of the Year in the 2018 Times and Sunday Times Good University Guide, in recognition of its strong student satisfaction, quality of teaching, overall student experience and engagement with employers.

NTU has also been rated Gold in the Government’s Teaching Excellence Framework, the highest ranking possible.

More information relating to the University's awards can be viewed here.