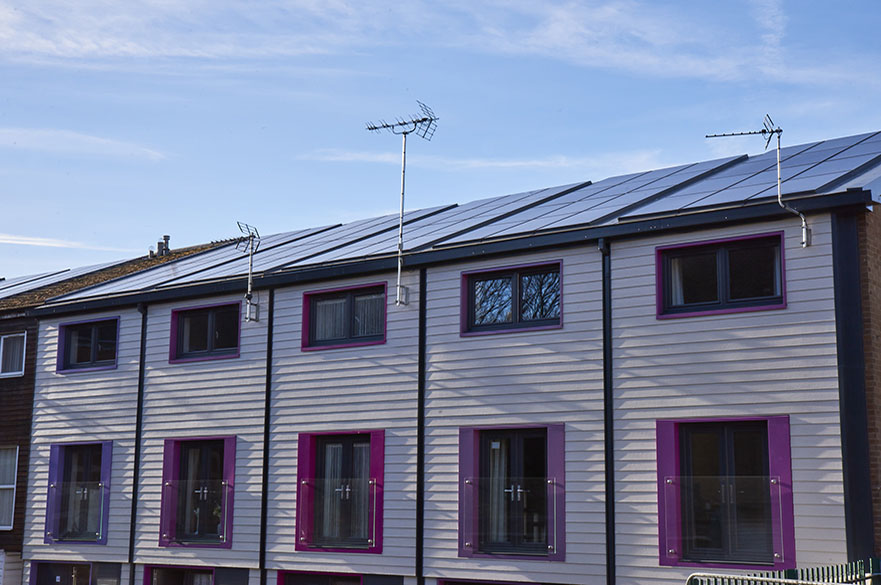 Part of the Remourban project
Properties were retrofitted in Nottingham

The UK became the first major economy in the world last year to pass laws to end its contribution to global warming, which requires all greenhouse gas emissions to be net-zero by 2050.

But research by NTU – part of the European-wide Remourban initiative – shows that 80 per cent of homes to be used in 2050 already exist, and most are woefully energy inefficient.

Professor Anton Ianakiev, of the School of Architecture, Design and the Built Environment, who has led the study, said: “We need dramatic improvements in our housing stock if we are to meet the net-zero carbon emissions target by 2050.

“Up to 80 per cent of the homes we will use in 2050 already exist. That means we need a route to upgrading 27 million homes to net-zero. A national programme to deliver in volume, at speed and cost-effectively is needed urgently.

“At the same time, large numbers of people are in fuel poverty in the UK, and heating their homes adequately uses so much of their income that they fall below the poverty line.

“Upgrading our housing stock will reduce carbon emissions, cut costs and improve health and well-being – all of which are significant societal and economic benefits.

“We have learned a lot about the practical difficulties that must be overcome in term of retrofitting house en masse, but also the real benefits gained.

“Making homes fit for the future needs of society is a major challenge that cannot be ignored. The evidence, advice and suggestions in our report will help everyone responsible for our housing stock to find solutions that work for them.”

The study – in partnership with Nottingham City Council and Nottingham City Homes – involved retrofitting 463 homes in the Sneinton area of Nottingham with a variety of measures including external solid wall insulation, photovoltaic solar panels, ground-source heat pumps and LEDs.

The five retrofit options were trialled across eight different building types to improve energy efficiency and reduce costs. It took place over five years and was funded by a £5 million grant from the EU Horizon 2020 scheme. Its findings are presented for the first time today.

The research showed that energy savings of up to 45 per cent were achieved by improving the building fabric of properties, which included wrap-around solid wall insulation on older Victorian properties and other houses where appropriate.

Similarly, the introduction of ground source heat pumps pushed up energy savings to 68 per cent.

The upgrades combined saved about 3 GWh/year in energy and over 550 tons per year in CO2 emissions across the 463 properties.

Professor Ianakiev said: “It was possible to achieve these savings while improving the lives of the occupants. The retrofits produced warmer and more comfortable homes and increased the occupants' sense of well-being.

“An impressive 86 per cent of occupants reported an improvement in the quality of their home and 52 per cent reported a significant improvement.

Other partners of the initiative in Nottingham included the Nottingham Energy Partnership and local SMEs INFOHUB Ltd and SASIE Ltd.

Nottingham City Council deputy leader and portfolio holder for energy and environment, Councillor Sally Longford, said: “The development of net zero carbon homes is one part of our ambitious drive to become a carbon neutral city by 2028.

“We are delighted with the outcome of the work undertaken through the REMOURBAN programme – not just for its contribution towards that citywide target, but also for those residents who now have warm homes and low energy bills, which can have such a huge impact on quality of life and well-being. We are excited about rolling out this approach to more homes.”