Alex Goulding’s enthusiasm is infectious. After chatting with him for five minutes, you too think you could win a hat trick of Guinness World Records. But of course, he makes it look easy and has trained – a lot. 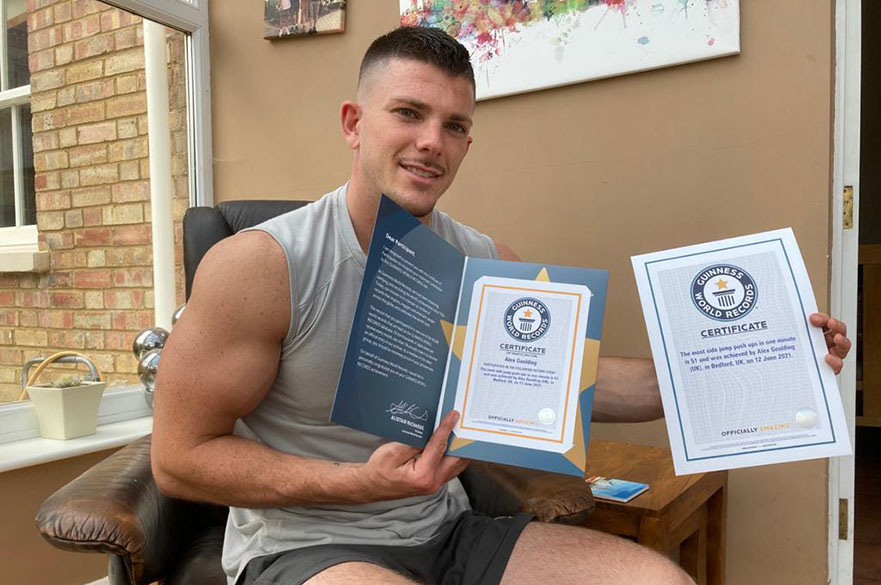 Is there any link between studying Criminology at NTU – something Alex did at both undergraduate and Masters level – and securing three Guinness World Records? Both achievements obviously require intelligence, skill and above all, commitment.

It turns out the reasons behind Alex’s desire to secure a world record are highly relatable.

“I went for it because of lockdown – I needed something to focus on,” he says. “Exercise has always been important to me. It’s my release, so I just practiced for four months every night when I came home from work.”

Alex’s first record-breaking attempt was in July 2021 – for the most side-jump push-ups in one minute. He managed 51, making it a new world record, and one he still holds to this day.

Subsequently, Italian TV show Lo Show dei Record, where Guinness World Records are attempted, contacted Alex and asked if he’d like to try another challenge. This time, he’d be competing against the former record holder to climb ten levels by plyometric push ups. To the uninitiated, plyometric means taking a run-of-the-mill press up and adding a jump or a clap to make the exercise more of a challenge.

Once again, Alex achieved his goal and broke the world record.

So how does winning a Guinness World Record feel? “Like it did when I heard I’d got my bachelor’s degree – amazing,” he says unprompted. “It’s all very unreal.”

Back in his hometown of Bedford, the 27-year-old now has a successful career working as a forensic operational support officer at Cambridge Constabulary.

And what of Alex’s memories of NTU? They were “without a doubt, the happiest of my life,” he says. “I was very regimented about my studies and always remained focused.”

Alex’s third world record attempt took place on Sunday 13 March. He successfully managed to beat his own original attempt at the most side push-ups, taking the new record to 53.

Dedication is indeed what you need.