Floor Lacrosse is an exciting and innovative game that is suitable for all ages including youngsters with a range of special needs. It can be used in competitive events, informal recreational settings or educational settings.

In many ways Floor Lacrosse simulates lacrosse by playing it at floor level with the participants gaining possession by ‘capping’ the ball and then travelling and or passing it as part of a team effort. The use of 'position roles' in specific zones should produce a fast exciting invasion game in which the use of space and speed truly reflects the best traditions of the main game of lacrosse.

The ball is played on the court surface for all of the time, except in the cases of the two defender sweepers with pop lacrosse sticks. The emphasis of the game, as with lacrosse, is to move the ball quickly when in possession and to pass to a free team member. When not in possession receive the ball unmarked as an unmarked player.

The game is best developed by encouraging open running play rather than the contest resting on the outcome of one to one marking.

Further information on the development of Floor Lacrosse.

Whilst Floor Lacrosse can be played using a number of variations according to the needs of the participants and/or context of the situation, the following approaches have been found to be the most appropriate. 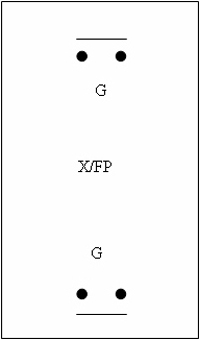 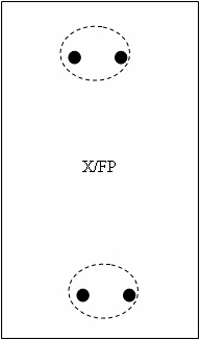 There are eight in a squad, six/five/four on the pitch (according to the rules or the version being played). Teams can be of single or mixed gender and inclusive with individuals with special needs in matched ability pairs in specific zones.

For the competitive version see area of play diagram.

Players may only be changed from role/area via the substitution 'on the fly' (not whilst on court).

No special protective equipment is required for goal keepers as the ball will rarely be lifted or projected at a dangerous speed. Rules also strictly control the use of sticks and physical contact in the field and goal areas to minimise potential dangerous play.

They may only use the cap part of the stick to stop the ball within goal circle (however they must also not lie on the floor or place the stick horizontal to stop the ball). A four second time limit applies to clearing the ball. Field rules apply outside the goal circle.

For competitive play it is recommended that that the goals are approximately 1.8 to 2 meters wide (or any similar distance used in a commercially produced mini goal sets) and, approximately 0.75 to 1 metres high. For recreational play any safe markers can be used (bins, cones etc). 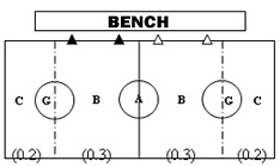 Area of play ratios to length 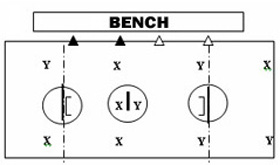 All play is started and stopped by the sound of the referee's whistle. The duration of the game shall be two halves of 15 minutes with an interval (half-time) of not more than five minutes.

A centre player starts the game with a pass from the centre circle. The player with the ball must pass from within the centre circle to another outside the circle whilst all others must be in their respective halves of the court, except the offensive sweepers. See starting alignment and positions diagram. (Team X v's Y)

A goal is scored by swinging the ‘capped ball’ with the stick along the floor so the ball is released and propelled over the goal line.

Any game situation needs to be managed to account for the wide variation in movement potential which groups of youngsters, with either physical or learning disabilities, often have. Thus some form of 'balancing' the contest between the respective teams needs to be considered.

Because of the format of Floor Lacrosse, the actual structure of the game makes this quite easy. Therefore traditional sport for the disabled classification systems may not be required. Instead a form of 'match classification' can be used with opponents in the respective four roles (area A, B, C, G) being notionally 'ability paired' with the agreement of the two team managers or with the discretion of the teacher in a lesson. Also at agreed times, the pairs of participants can be rotated from one area to another to experience the demands of the different player roles.

Participants are ranked before the game in terms of:

a) how well the player understands the objectives and rules of the game.
b) the physical abilities they have to be involved in the game.

This successful approach used in trials - 'match rankings' - involves each player in a team (N=8) being ranked according to their overall ability (in terms of both a and b, above) Number 1's have the most relative ability to number 8's with the least. The teacher, leader, coach or respective team managers can then simply agree on which areas of the pitch the ranked numbers will be paired or alternatively the following recommendations can be used. Substitutions should then be done with simultaneous matched pairs and with the other team subsequently alternating this initiative.

Even in competitive matches agreement between coaches could result in matched player being rotated from one zone to another at set times.

When using this game approach the following playing areas and rankings format is recommended.

One umpire officiates from either of the sidelines. Throughout play the official's discretion may be used to award penalties for dangerous play or unacceptable behaviour (in addition to the penalties above). A player may be sent off as a last resort.

The rules are there to protect players and make the game as continuous as possible. Unintentional fouls which do not give the offender or his/her team an advantage should result in a 'held' whistle whenever possible (official can call 'advantage').

Excessive use of the whistle is discouraged except to keep play safe and according the rules. As this is a dynamic game it is recommended that umpires carry out their officiating in a positive and friendly manner. Officials should use short, sharp, single blow of the whistle to both start and stop the game. A longer whistle indicates a goal. Clear, short explanation of fouls (e.g. stick contact on green, yellow ball) indicating with the arm, the team in possession to leave a second's time length before the call on possession.

A small piece of tape can also be placed on the cap to show youngsters which way to point the cap so the best angle is achieved to keep it flat on the floor.