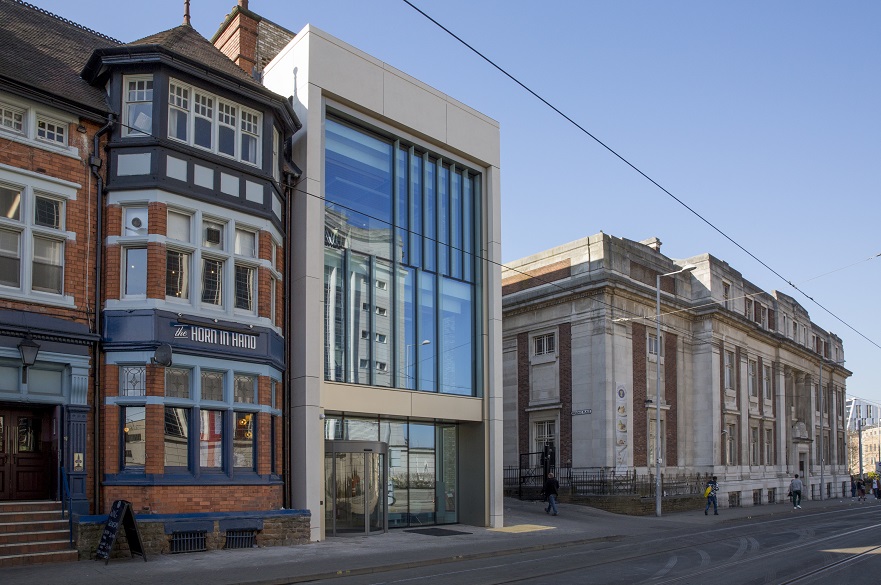 The University’s Global Lounge, which offers international and UK students space to meet, host events and promote internationalism, is moving down the road from its current Goldsmith Street location into the new building at 23 Goldsmith Street. Staff from the International Development Office, who support students recruited from abroad to study at Nottingham Trent, will also be located in the office building.

Staff from the Global Office and International Development office started moving into the new building today (March 4) with further moves planned throughout the month.

Professor Cillian Ryan, Pro Vice-Chancellor International and Head of the College of Business, Law, and Social Sciences, said: “We are excited to see this fantastic building completed. We have worked closely with architects and contractors to ensure it will provide ample space for our Global Lounge to meet and host events whilst also providing modern office space for colleagues working to support international recruitment. We are delighted with the result.”

The University bought the building – the site of the former Posh Spice restaurant which was left derelict following a fire in 2010 – and worked with CPMG Architects and Midlands contractor G F Tomlinson to transform it into a modern office and meeting space.

Director at CPMG Architects, Nick Gregory said: “We’re pleased to have worked with Nottingham Trent University to transform this derelict brownfield site into a distinctive and attractive addition to the Nottingham skyline. The striking building has significantly improved the aesthetics of the street and will not only provide a modern working environment for university staff, but a spacious exhibition space for future events and initiatives. I hope the staff enjoy their new offices within the city.”

Andy Sewards, managing director at G F Tomlinson, said: “It’s been a pleasure to work with Nottingham Trent University and CPMG Architects on the new modern Global Lounge. We are proud to have helped transform the old derelict site into another incredible space for staff and students to enjoy, especially as the space will be used to celebrate cultures from all around the world by those who have come to the great city of Nottingham to further their education.”