Leaving dogs in cars is dangerous all year round, even winter, study shows

People are being warned about the dangers of leaving their dogs in parked cars after a study found that internal temperatures were hot enough all year round to pose a risk to dog health. 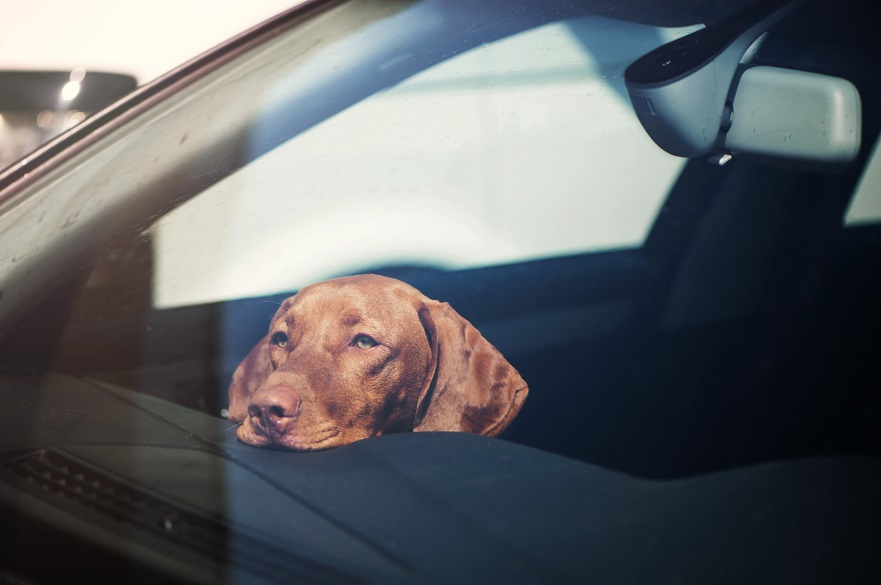 Most dogs are comfortable at temperatures between 15-25°C, but this is dependent on a range of factors

Researchers in dog welfare at Nottingham Trent University also found that – rather than midday being the hottest point of the day – the highest and therefore most dangerous internal temperatures occurred between 4-5pm.

The researchers, writing in the Open Veterinary Journal, monitored internal temperatures of UK cars – which had no dogs inside – continuously every day for two years as part of the study.

Most dogs are comfortable at temperatures between 15-25°C, but this is dependent on breed, coat length, fitness and a range of other factors.

The team found that temperatures exceeded 25°C in every month of the year, which is high enough to cause overheating in brachycephalic breeds – those with flat faces – such as bulldogs, French bulldogs and pugs.

Beyond 35°C, dogs will need to pant to control their temperature, and if they’re trapped in a hot car, panting stops being effective as the temperature and humidity rises.

The study also looked at the effect of time of day on car temperatures, finding that the interval between 4-5pm had the highest percentage of total temperature readings over 35°C.

The highest percentage of total temperature readings over 25°C, meanwhile, occurred between 3-4pm.

In enclosed vehicles dangerous microclimate conditions can develop due to the lack of air movement and this can result in reduced latent heat exchange for animals.

Early signs of heat stroke in dogs include panting, red or dark gums and tongue, confusion and unsteadiness leading to collapse, diarrhoea, vomiting and even seizuring leading to coma. If the dog is not cooled and treated by a veterinary surgeon quickly, the condition can be fatal.

The researchers say their findings suggest that annual campaignsto raise awareness of the risk of dogs becoming ill and dying in hot cars – which typically begin in May – need to start earlier in the year.

“Our work shows an even bigger risk to leaving dogs in parked vehicles than previously thought,” said Dr Anne Carter, a researcher in Nottingham Trent University’s School of Animal, Rural and Environmental Sciences.

She said: “We know that some dog owners are already not heeding the warning message about the risk of leaving their dog in their vehicle.. People assume the risk is only midday during the summer, when in fact cars can reach potentially dangerous temperatures all year round, with late afternoon the hottest time period.”

“As heatstroke can be fatal in dogs, public awareness campaigns should consider launching in April or earlier, and also potentially include warnings about the increased risk to dogs in cars in the late afternoon.”

Emily Hall, a researcher and veterinary surgeon at Nottingham Trent University, added: “This work is also important as climate change is causing a rise in global temperatures and heatwaves are predicted to become more frequent and extreme.

“The risk is not limited to being left in a vehicle. Many modern cars are equipped with air conditioning, but older models may only have air vents or no ventilation mechanism at all in storage compartments.

“Dogs transported in these vehicles could be exposed to dangerously high internal temperatures during long journeys, particularly if the vehicle is stationary or queuing in the sun.”

Dogs Trust Veterinary Director, Runa Hanaghan, said: “Dogs should never be left alone in cars as even just a few minutes in a hot car can prove fatal. Sadly every year we hear of dogs getting in distress because they are left in cars on warm days, but what this important research shows is that we need to be alert to this all year round.

“Many people still believe it's OK if the windows are left open or they're parked in the shade, but the truth is, it's not and we strongly advise that dog owners should never leave their dog in a car, even if it feels cool outside.

“Dogs can’t cool down in the same way as humans and the heat can quickly become dangerous for them, so if you see a dog in a car in distress, call 999 immediately.”

The study also looked at the risk of storing non-refridgerated medications in vehicles, which might be at year-round risk of exceeding their licensed storage temperature limits which range from 8 to 25°C.

Last month it was revealed that researchers in dog welfare at Nottingham Trent University and the Royal Veterinary College had found that brachycephalic breeds were particularly at risk of developing heatstroke.

Leaving dogs in cars is dangerous all year round, even winter, study shows