Almost half of cats kept indoors, with urbanisation and fears over pet safety driving the increase, study suggests

Almost half of domestic cats are being kept solely indoors, with the number expected to grow, a new study suggests. 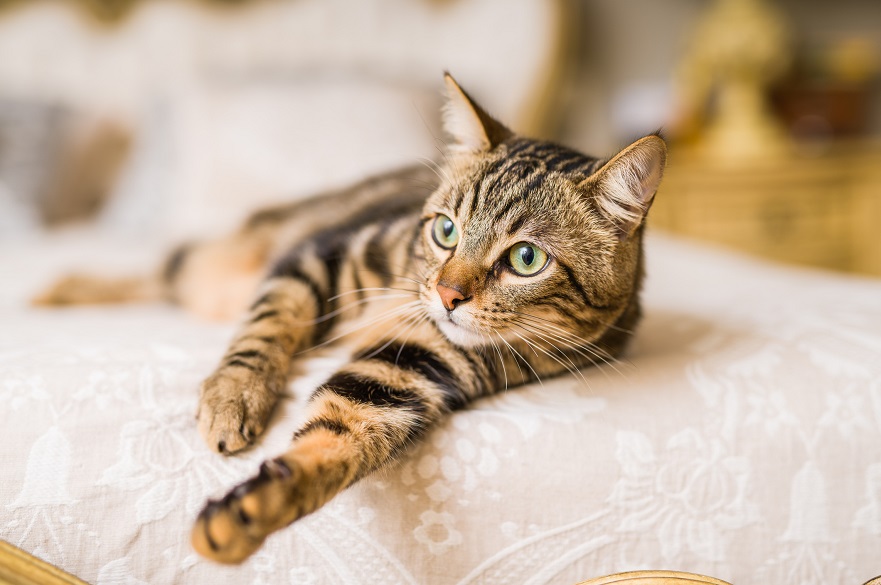 The researchers surveyed more than 5,000 cat owners across the world as part of the study

Cat behaviour and welfare experts at Nottingham Trent University found that owners were particularly concerned about protecting their cats from traffic, people and other wildlife.

The researchers surveyed more than 5,000 cat owners across the world as part of the study, which aimed to investigate the factors they considered when deciding on an indoor-only or indoor-outdoor lifestyle for their pet.

Previous research has shown that indoor-only animals may exhibit more undesirable and stress-linked sickness behaviours than those that have a mix of indoor and outdoor lifestyle.

The team, based in the university’s School of Animal, Rural and Environmental Sciences, found that younger cat owners, aged 26-35, and those living in city centres and urban areas were among those most likely to keep their cats indoors.

Cats with existing health issues and pedigree cats were particularly likely to be kept indoors, as well as younger cats.

The researchers, writing in the journal Animals, found that 41% of cat owners kept their pet solely indoors.

In total, 85% of the major reasons for keeping cats indoors related to perceptions around cat safety.

More than half (59%) of cat owners cited concerns about traffic as the major reason for choosing an indoor-only life for their pet, with almost all owners (98.7%) influenced in some way by traffic when making their decision to keep their cat indoors.

More than one in ten cat owners (13%) cited protection from people being a major factor, with owners concerned about their cat being stolen – particularly those with pedigree pets – or being caused intentional harm.

Ten percent of owners – rising to 20% in the US and Canada – said they kept their pet indoors to protect it from other animals, both owned and feral, such as local wildlife and dogs. And some were concerned about encounters with other cats, due to fighting or disease transmission.

About a third (30%) of participants in Australia and New Zealand, meanwhile, kept their cat indoors to prevent it hunting other animals.

Concerns about cats running away and that it did not have what the owner considered to be a suitable personality for outdoor life were other reasons given by owners.

One in five cat owners (19%) stated that they had no option of giving their cat any outdoor space.

Studies have shown that the UK is seeing a rapid increase in the number of cats being kept indoors only and the researchers say that they expect this number to rise in line with increasing urbanisation.

The academics argue that, given the anticipated increase in indoor-only cats and the associated issues that can occur from keeping cats indoors, research should start to focus on how best to improve their behaviour and wellbeing in these environments.

“Our study has helped to shed light on the priorities of cat owners regarding the welfare and wellbeing of their pets,” said lead researcher Rae Foreman-Worsley.

She said: “As well as better understanding the considerations owners give to their cat’s lifestyle, the findings are important as they help us to identify trends and cat populations potentially at risk of compromised welfare through unsuitable lifestyles. It is important for us to look at how best we can improve the behaviour and wellbeing of indoor-only cats, particularly those significantly more likely to be kept indoors, such as pedigrees.

“To ensure they are adequately provided for, it is crucial for owners to recognise the individual needs of cats with different temperaments, activity requirements or previous life experiences.

“Those living in city centres, urban environments and apartments are significantly more likely to have indoor-only cats, and as urbanisation is set to continue it is reasonable to assume the proportion of cats kept indoors will too.”

Nottingham Trent University researcher Dr Lauren Finka added: “The choices owners make concerning the environments they provide their cats with can have important implications for the cat’s general wellbeing and quality of life. It’s therefore vital we understand how owners’ decision-making processes and their own lifestyles may impact on their choices for their cats.”

Almost half of cats kept indoors, with urbanisation and fears over pet safety driving the increase, study suggests