Let cats decide when to be petted to avoid them becoming hostile and increase their affection, study suggests

If you’re looking for more affection from your cat – and want to avoid getting bitten or scratched – then let it choose when to be petted, a new study suggests. 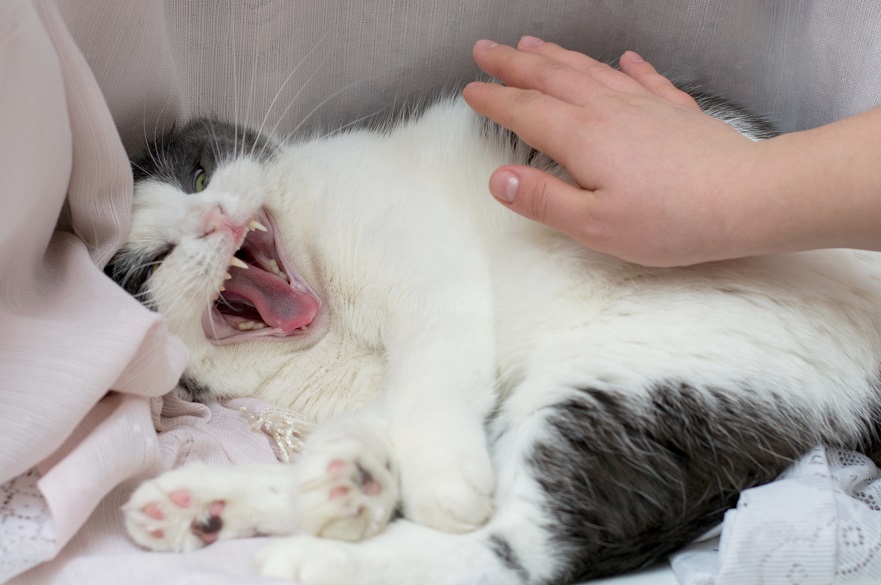 Experts in feline behaviour and welfare at Nottingham Trent University also found that paying close attention to cats’ behaviour and body language and thinking about where to stroke them were key when improving interactions between cats and people.

They have developed a simple set of interaction guidelines and found that when these were followed cats were significantly less likely to behave aggressively towards people and were also more affectionate.

Nottingham Trent University’s Dr Lauren Finka, the lead researcher on the study, worked in collaboration with leading animal welfare charity Battersea to develop the guidance for owners and cattery staff to address the fact that many people struggle to recognise when cats might not enjoy being petted.

The guidance and advice follows a simple ‘CAT’ acronym that encourages people to provide the cat with choice and control (C), pay attention (A) to the cat’s behaviour and body language and think about where they are touching (T) the cat.

Cats don’t have a reputation for being the most tactile of creatures, with several studies suggesting that aggression towards people isn’t uncommon, particularly during social interactions between cats and their owners. In one such study cat aggression was reported by almost half of owners.

According to Dr Finka, providing the cat with choice and control is key to ensure they feel happy and comfortable during interactions. This includes gently offering a hand to the cat and letting it decide if it wants to interact or not, usually indicated by it rubbing against the person’s hand. Owners should allow the cat to move away if it chooses, and not be tempted to pick it up or follow it, as this takes away the cat’s sense of control.

People should also pay close attention to their cat’s behavioural reactions – if they turn their head or move away during the interaction, their ears rotate or become flattened, they shake their head or lick their nose, the fur along their back appears to ‘ripple’ or their tail ‘swishes’ rapidly then take these as signs the cat may need a little break from petting. Similarly, if the cat goes a little still, stops purring or rubbing against you, suddenly starts grooming itself or sharply turns its head to face you, then it is unlikely to welcome further stroking.

And in terms of where cats like to be stroked, most friendly cats will prefer the base of their ears, around their cheeks and under their chin. Avoiding the tummy and the base of their tails and being careful when stroking along their backs is generally advisable, although each cat will have individual preferences, so the key is to pay close attention to how each cat responds when these areas are touched.

As part of the study, the team monitored participants’ brief interactions with 100 cats housed within the cattery at Battersea’s London centre, studying the cats’ behaviour and posture. Each participant interacted with six cats, three before they received training on the ‘CAT’ guidelines and three after.

They found that cats were much less likely to exhibit signs of discomfort or behave aggressively when people followed the ‘CAT’ guidelines. Cats were less likely to hiss, swipe at or appear anxious or frustrated during interactions with participants. Cats shook their heads, swished their tails and rotated or flattened their ears less and were less likely to rapidly groom themselves, to ‘freeze’ or adopt a crouch or tense posture.

The same cats were also more likely to show friendly behaviours towards the participants and to appear more comfortable during the interactions that occurred post-training, the researchers found. Cats rubbed against participants and ‘waved’ their tails more frequently, had their ears held in a ‘forwards’ or ‘neutral’ position, ‘kneaded’ with their paws and also sniffed people for longer.

Despite cats global popularity as companion animals and their increasing inclusion within ‘Animal Assisted Interventions’ and animal-based tourism such as cat cafes, little research has been done to understand how cats prefer to be interacted with which may inadvertently be compromising their welfare.

The guidelines are intended to be simple but effective in helping to improve cats’ comfort and wellbeing during interactions with people, as well as reduce the risk of human injury. They are designed to be generic and so could be used in any context where people are stroking and interacting with cats, whether that’s a home setting, in a rehoming centre or during more formally organised events such as Animal Assisted Interventions..

“The results demonstrate a clear preference amongst cats for a more ‘hands off’ approach to petting, which ultimately lets them call most of the shots,” said Dr Finka, a cat behaviour and welfare specialist in Nottingham Trent University’s School of Animal, Rural and Environmental Sciences.

She said: “Cats are not necessarily known for being overly expressive when it comes to communicating how they are feeling. This can often cause issues during petting because many cats may feel a little uncomfortable at times, but this isn’t something that is always easy for us to pick up on.

“These simple ‘CAT’ guidelines are designed to ensure that cats are never overwhelmed during petting and that people are being mindful of where, how and how much they are stroking cats. They also encourage people to look out for some key subtle behavioural signs of cat discomfort, and to respond accordingly to these, rather than waiting until the cat behaves aggressively before giving it a break.

“The guidelines are designed to be suitable for all cats because they encourage a flexible approach based on how the cat is responding in real time, ensuring that the interactions meet the needs and preferences of each individual. For example, applying the guidelines with some cats might mean not touching them at all – because the cat chooses not to engage – whereas for others it might involve a full on cuddling session because the cat keeps asking for more.”

Battersea’s Feline Welfare Manager JoAnna Puzzo, added; “While every cat has a wonderfully unique personality, they do often share fundamental similarities, as this new study shows. Cats can be incredibly subtle when expressing their likes and dislikes, and as a result their behaviour can be misunderstood or ignored completely. By using these new simple yet effective ‘CAT’ guidelines, owners will be able to better understand how their cat is feeling and adapt how they interact together to ensure their pet is happy and relaxed.

“Collaborating with Dr Finka and the University has been an invaluable experience for Battersea. The study’s findings will be of great benefit to not only the cats in our care and the owners who look to us for pet care advice, but the millions of pet cats across the UK and beyond.”

The research is published in the journal Frontiers in Veterinary Science.

Let cats decide when to be petted to avoid them becoming hostile and increase their affection, study suggests