Research has found that involving people with refugee and asylum-seeking backgrounds in tourism can help them integrate better and can build understanding between communities. 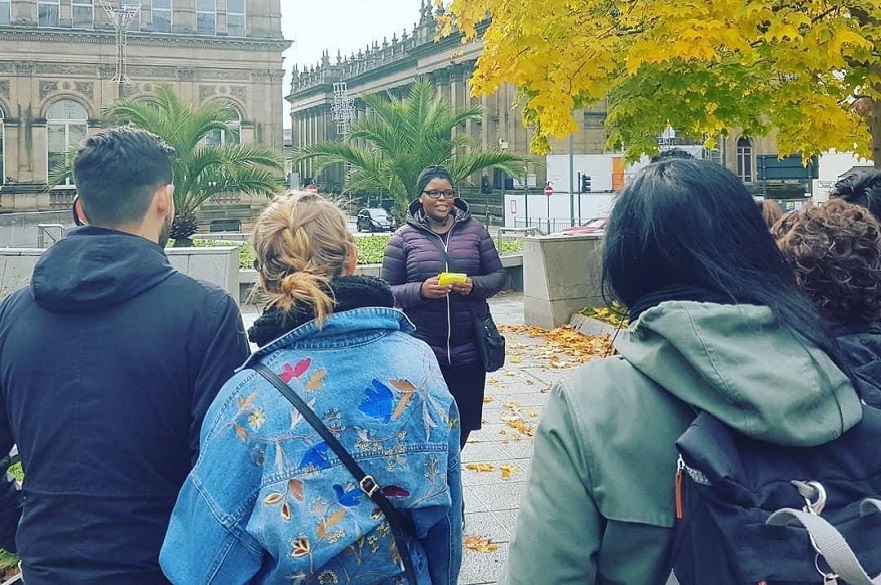 The two-year study, which was led by Leeds Beckett University, working with Nottingham Trent University, looked at a group of ten people with refugee or asylum-seeking status, who found themselves in Leeds after fleeing war and persecution in their home countries. In addition, discussions with 10 support workers in the industry and third sector were included in this project.

As part of the tourism venture, Tales of City Tours was set-up by former Responsible Tourism Management Masters student, Emily Stevenson. Refugees were involved as tour-guides in creating, designing and leading walking tours in the city. They chose the areas they would cover on their tours based on the meaning it had to them. For example, Leila, a social worker and community activist originally from South Africa, decided to include the main post-office building in her tour – this was where she went when she first arrived in Leeds to collect her asylum cash allowance once a week. She was able to show the building to her tour group and explain its significance to her.

Dr Elisa Burrai, a Senior Lecturer in the School of Event, Tourism and Hospitality Management, led the research: “Having been forcibly displaced from their homes, refugees and asylum seekers had to negotiate their identities and sense of purpose in new environments, so by asking them to be involved in leading tourism experiences and creating a narrative, it can help them integrate into society. It allows them to share their story and to overcome societal hostility towards refugees and asylum seekers by educating people as to what it’s like to be in their position.

“We also wanted to look at what the active participation of refugees and asylum seekers in tourism can bring to Leeds - how it can help forge societal changes and cross-cultural understanding. During the walking tours, the refugee tour-guide explained why certain parts of the city centre were chosen for their tour, and how those areas related to their personal economic and social-cultural background.”

For those taking part, there were many benefits:

Sajan, a person with refugee status from India, felt empowered and that he was valued as a human being because he was able to express his true identity unlike in his home country: “They did not respect me and my gender…that was my big problem, there, they put me down.”

Gaani, who is originally from Somalia, said being involved in the tours helped her feel part of a community: “Leeds is such a diverse city…walking side by side with other migrant communities helped me to feel at home.”

Marius, a person with asylum-seeking background from Guinea, highlighted how connections can be created using the tours: “We can talk about our differences, but I believe what we have in common is far larger. Music doesn’t have any boundaries…love is universal…nobody rejects love.”

Professor Dorina-Maria Buda, Director of the Marketing and Consumer Studies Research Centre at Nottingham Business School, said: “In the current geo-political climate, looking for and implementing meaningful mechanisms to build inclusive and diverse societies is the key for progress. It is well known that refugees and asylum-seekers bring a wealth of skills and knowledge with them, and as such are well suited to get involved in business sectors such as travel, tourism and hospitality. Offering welcome is inherent in these socio-cultural and business sectors, and through our projects we strive to contribute to changing the tide of wider employment and integration issues of forcibly displaced people in the UK.”

For further information on the Marketing and Consumer Studies Research Centre at Nottingham Business School visit the website, Twitter or LinkedIn.