A unique free-to-use ‘skateboard-friendly space’ has opened for public use in central Nottingham following significant input from students and researchers at Nottingham Trent University (NTU). 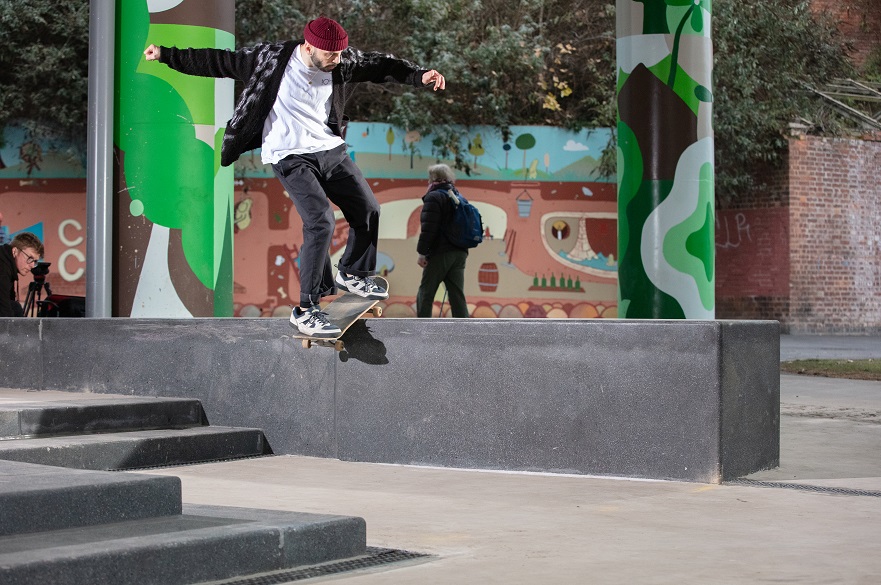 Tram Line Spot, near the Broadmarsh development site and the new Nottingham College campus, is a purpose-built, community-designed ‘skate spot’ that can be used in all weather. It is one of the first spaces of its kind in Europe.

The space pushes the boundaries for what’s possible in multi-use, active public realm across Europe. Rather than a ‘skatepark’, it has been designed to blend into and complement the wider public area around Sussex Street and to be welcoming to other user groups, including quad and inline-skaters, street artists and young people studying at the College or visiting the Nottingham Contemporary.

After non-profit community development organisation Skate Nottingham were contacted by Nottingham City Council in autumn 2019 to start initial planning for the space, NTU has been involved at several different stages, with staff and students gaining rich benefits for research, learning and teaching.

NTU staff and students attended participatory-design workshops during the 2019 and 2020 Nottingham Festivals of Science and Curiosity and several students contributed to the Inspired by Skatespots project with Ignite Futures and UK Research & Innovation (UKRI).

This project, which looked at case studies of other mixed-use spaces across Europe, including in Copenhagen, Paris, Glasgow and London, produced important recommendations on how Tram Line Spot can be inclusive for a wide range of users and be safe and welcoming, with skateboarders providing ‘passive security’ as positive users and active custodians of the space, deterring anti-social behaviour. Students shared their insights at a public panel discussion at Metronome alongside academics and practitioners from all over the UK.

Through the autumn 2022 term, undergraduate and postgraduate students from Nottingham Business School have worked with Skate Nottingham as their client for three different experiential consultancy projects. A team of five MSc Marketing students investigated the potential of the space for marketing Nottingham as the best destination in the UK for young people to visit or study, identifying social media, guerrilla marketing and partnership strategies. More than 40 BA Economics and BA Business Management joint-honours students also analysed the potential economic and social impacts of Tram Line Spot and its impacts on wider place-making for the city, including as a complement to Nottingham City Council's aspirations to be a UNICEF Child Friendly City.

Research led by NTU’s Professor Carrie Paechter into the experiences of girl skateboarders has been progressing at the same time and has contributed to the inclusivity of design and diversity of use, a major objective for Tram Line Spot.

Involving the University of Leeds and Skateboard GB and funded by the Leverhulme Trust, the research has enabled Skate Nottingham to take account of the emerging findings, particularly the need for flat space to learn and practice that was expressed by many of the girls and young women interviewed, alongside the importance of organised sessions led by women coaches. This insight will help shape the initial events and activities programme at the space, which is being funded by an Awards for All grant from The National Lottery Community Foundation.

As well as being designed through a process of participatory research, the space was also funded in an innovative way. Skate Nottingham’s Crowdfunder UK campaign has so far raised £16,810 with 235 individual supporters. This included £1,000 kindly donated by Rock City and DHP Family and £7,500 from the Sport England ‘Active Together’ fund. In addition to the funds raised through the Crowdfunder UK campaign, Skate Nottingham also received £5,000 from Skateboard GB, the National Governing Body for skateboarding.  The bespoke steel installations were then fabricated by Betongpark, who were also responsible for the temporary skateable installation at The Strand, Westminster, in September 2021 and the recent, sensitive redevelopment of the historic Stockwell Skatepark, Brixton.

Skate Nottingham aim to be able to sustainably fund and deliver a wide-ranging programme of skateboarding events and educational outreach at Tram Line Spot site throughout 2023, including construction skills workshops and creative and cultural activities for a wide range of age groups, and are keen to continue to work closely with NTU.

Visit the dedicated Instagram page for Tram Line Spot for photos and films. Use the hashtag #tramlinespot or tag www.instagram.com/tramlinespot. The events and activities programme will be on Skate Nottingham’s social media, @skatenottingham on Instagram and Facebook and @NottinghamSkate on Twitter, and on the website www.skatenottingham.co.uk