A solar cooker that heats food by concentrating the sun’s rays can be used inside the home thanks to new research by Nottingham Trent University.

An interview with Prof Amin Al-Habaibeh

A solar cooker that heats food by concentrating the sun’s rays can be used inside the home thanks to new research by Nottingham Trent University.

The project aims to allow people in hot, arid countries with sun all year round to cook indoors without the need for gas, electricity or burning wood.

The technology works by capturing sunlight on the outside of a property and concentrating its power with Fresnel lenses.

This concentrated light is reflected through channelling into a small space in the centre of a highly-insulated aluminium oven, which is fitted with thermal bricks.

A sensor provides live data on oven temperature and the level of heat can be controlled by reflecting away some of the concentrated light.

In a hot country like Kuwait, with long periods of sunlight, just three Fresnel lenses could provide an oven temperature of around 200˚C, the researchers say.

On a clear summer day in the UK it could be possible to achieve similar temperatures with only ten Fresnel lenses.

Professor Amin Al-Habaibeh – of the School of Architecture, Design and the Built Environment – led the team which made a small-scale prototype to prove the concept. It was in collaboration with three students on an exchange programme and was later improved by a separately funded project.

The prototype has three Fresnel lenses and can reach 60˚C on a typical summer day in the UK. It was recently tested and successfully cooked an egg. 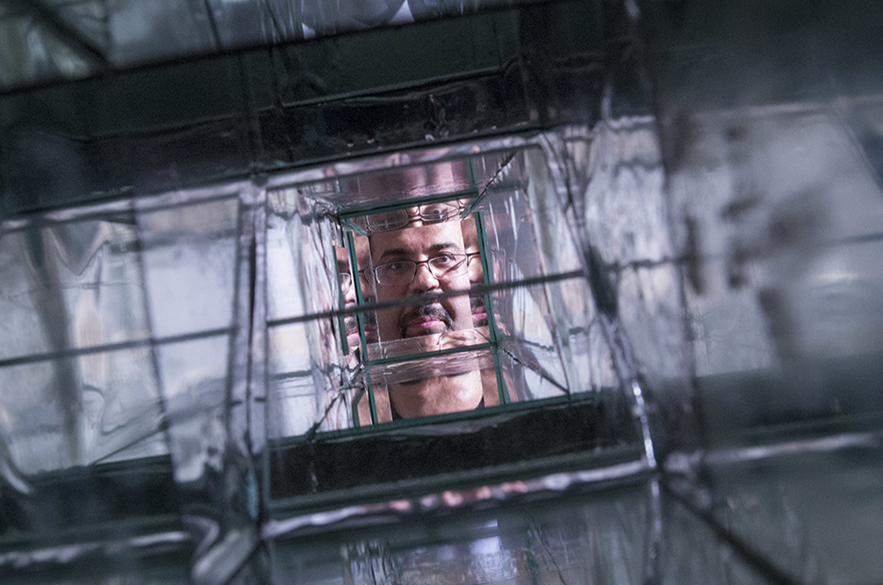 Through the chimney
Prof Amin Al-Habaibeh

Professor Al-Habaibeh said: “This is a very exciting project as this technology has the potential to change the way millions of people cook at home and could dramatically reduce the world’s carbon footprint.

“In hot countries which have sunshine all year round, there really is no need for people to cook using electricity, wood or gas.

“We have proved that it’s possible to cook food inside the home by harnessing the power of the sun. Until now other solar cookers have been designed only for use outdoors.”

Bubaker Shakmak, a postdoc researcher at the university who worked on the project, said: “Not only is this technology better for the environment, but it can help people in developing countries who don’t have access to electricity or gas.

“By providing this technology at an affordable price, people would be able to heat food more quickly, easily and sustainably than ever before.”