Students have been sharing their recommendations on how Nottingham city and its universities can work together to support creativity and innovation after travelling to Europe to explore the theme. 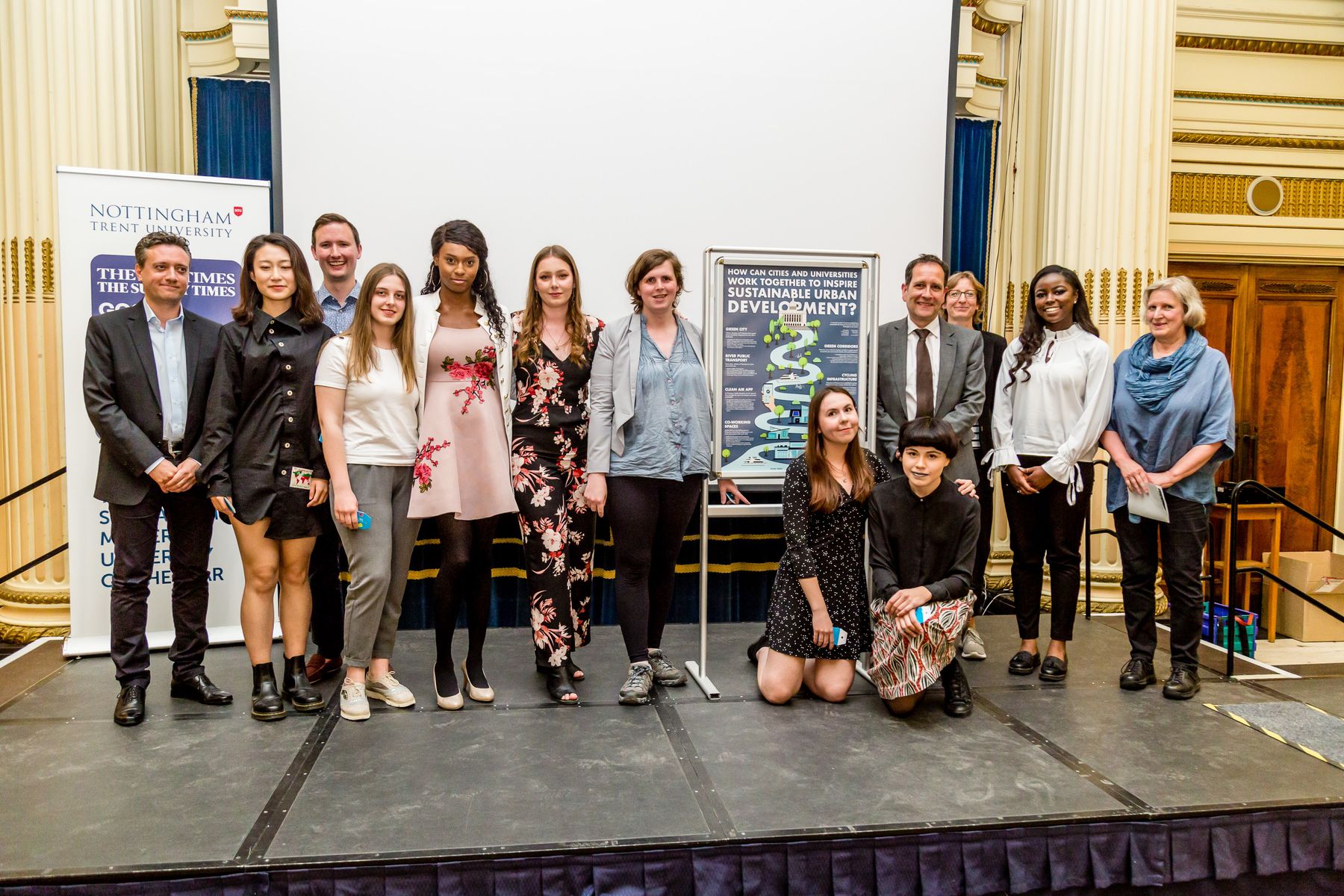 Winners of the prize for Best Poster

As part of a European Creative and SMART Cities Challenge, more than 100 Nottingham Trent University (NTU) students and 14 academics visited Karlsruhe in Germany and Timisoara in Romania, supported by NTU Global.

The students, many of whom were from widening participation backgrounds, spent time learning about Nottingham’s SMART and creative assets before they travelled to Europe. They then visited at least one SMART/Creative City on the way to Karlsruhe or Timisoara to look at specific initiatives to support creativity and innovation.

The students learnt from schemes currently in place in the European cities to suggest innovations for Nottingham, such as a clean air app, green corridors around the city, technology-enabled SMART parks and co-working spaces.

A showcase event then saw the students present their findings and recommendations to senior members of NTU, Nottingham City Council, the Lord Mayor and representatives from Karlsruhe and Timisoara. The students worked in cross-subject teams of eight or nine members and each team presented a poster and a two-minute pitch.

Nottingham City Council have since offered four internships for selected students to work in its Economic Development Team during the 2019/20 academic year and the summer vacation 2020.

In addition to the internships, the NTU students have been invited by Nottingham City Council’s director of Planning and Regeneration to present their recommendations to the recently elected Planning Committee, giving them another opportunity to engage with city leaders and provide feedback on the developments they would like to see which would encourage them to stay in the city after graduation.

Ian Curryer, Nottingham City Council chief executive, also travelled to Karlsruhe and spent time listening to the students’ ideas, as well as meeting with the universities and civic authorities. He said: “This project forms part of the emerging City Centre Strategy which is being developed with key partners and they are focusing on how we can build resilience for the city centre into the 2020s. The event was an opportunity for the students to present their innovative ideas on how to improve the city and was an example of how NTU and indeed the University of Nottingham are important partners in driving forward the ingenuity agenda in the City.”

For NTU, the project was designed to enter into a dialogue with citizens of Nottingham and two of its twin cities on how European “future” cities might work with their universities to support creativity and innovation in solving local and global challenges.

It also sought to demonstrate the University’s long-term commitment to European mobility and engagement post-Brexit and develop European networks for its staff and life-long friendships for its students.

Professor Edward Peck, NTU Vice-Chancellor, said: “At times of uncertainty about our relationship with Europe, it is more important than ever to celebrate the benefits that the University - and especially our students - gain from our connections with the rest of the continent.”

Following a meeting with the Mayor of Timisoara, Nicolae Robu, Nottingham and Timisoara also agreed to draft a five-year plan to relaunch and provide strategic direction to the twin city partnership in its 10th anniversary year. NTU U and its partner, West University of Timisoara, will be co-signatories.