Lifelike patient manikins and simulated emergency situations are to form the basis of new Paramedic Science courses at Nottingham Trent University (NTU), including a graduate route and an apprenticeship. 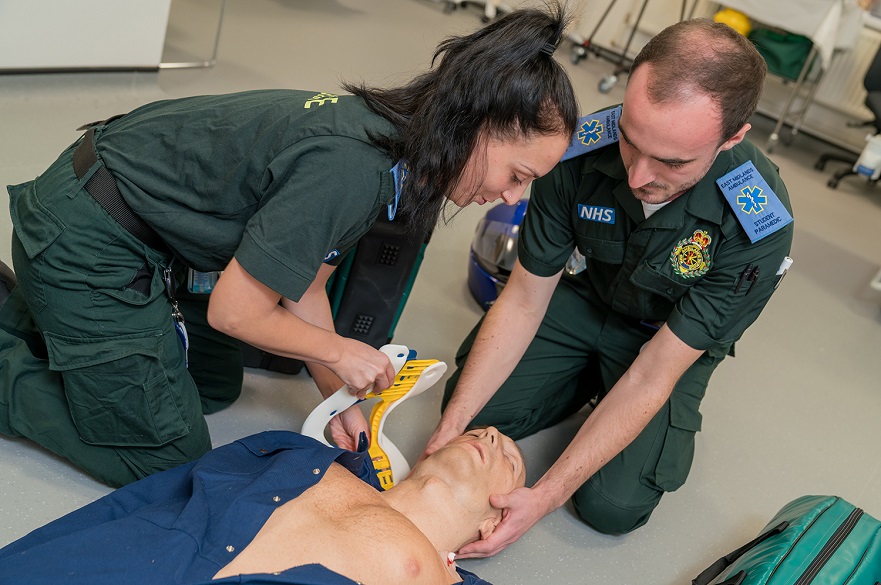 Students will work on lifelike manikins in a range of situations

The courses will be taught in a purposely renovated facility, which features hospital beds, clinical areas and a consulting room. Lifecast Body Simulation manikins – designed and produced at Elstree Film Studios in London – will give students experience of working with men, women and children with a variety of injuries, and in a range of settings.

The clinical skills areas are equipped with cameras to allow students to watch their peers and lecturers tackle simulations while observing, asking questions and giving feedback. The simulation, observations and voices of the manikins are controlled via iPads, allowing tutors to change the situation to reflect an ever-changing, real-life medical emergency.

As well as offering a BSc (Hons) Paramedic Science degree, NTU’s School of Social Sciences has also launched a graduate entry route for people with health-related degrees – the MSc Paramedic Science. Both courses include compulsory practice placements within the ambulance service.

Andrew Kirke, Principal Lecturer in Paramedic, Urgent & Emergency Care at NTU, said: “These courses will prepare students to enter a modern, highly-skilled, integrated workforce. The demands of the profession mean that Paramedics must work across traditional boundaries, and we’ll be bringing in areas like law, policing and social work to ensure they have the knowledge and skillset needed for this challenging and fast-paced career.”