For Black History Month we will be celebrating and featuring a number of our student athletes and sporting Alumni. We caught up with NTU Sport Scholar Bolu Fisher, who is currently in her third year studying Sport and Exercise Science.

I first got involved in sport competitively when I was about 12/13 years old, so I was a pretty late comer in all honesty. I got involved through an old friend, she was part of our local football team and they were short of players. She said I should come down for a session and literally from then on I just couldn’t get enough.

I actually did athletics first, I also loved football, I was a goalkeeper to start off with. When I got to secondary school I became more attracted to football because it seemed like that was what everyone was playing. I also think what attracted me to football was there was a woman’s football game live on tv (FA cup final) I didn’t realise Women’s football was an actual thing, just seeing them play on tv made me want to play even more.
What is your greatest sporting achievement?

When I was 16/17 I signed for London Bees in the woman’s championship (formally WSL 2). We had a cup game against Arsenal Ladies, I did not really think I was going to play that game but one of the players on our team actually got an injury fairly early on in the 2nd half. I was brought on and honestly even though we didn’t win, it was one of the best games I had ever played.

Did you face any barriers during your time playing sport?

I think the biggest barriers have probably been injuries, obvious everyone would love to have a season injury free but unfortunately I’ve had a lot of injuries both big and small. The hardest part for me was the mental aspect of it, I used to fear I’d get dropped or that no team would want to sign me after my injury track record. It’s such a cliché thing to say but the best way to overcome it is by doing everything you can to change your mindset. You need to have belief in your ability, trust the people around you, such as your teammates , medical staff etc, because they have your best interest at heart. Most importantly you need to just work hard during the injury and after, because for me I just thought complaining about being injured wouldn’t change the fact that I was injured.

In my opinion it’s just an opportunity to celebrate and remember the things that black people have achieved and also to remember how far people have come despite adversities they have faced.

For me it has to be Marcus Rashford, I am not actually a Man United Fan, but he does so much outside of football, not just for black people but for anyone who’s circumstances make things more difficult for them, compared to the average person. The fact that he is only 22 years old and already and he doesn’t just focus on football and money, but how he can help make things better for others, for me that’s a good role model.

The way they present themselves off the pitch is just as important as how you present yourself on the pitch. Of course he has his faults as no one’s perfect, but for me it’s the work he does off the pitch that influences me and reminds me that yes even though you may be rich and famous and good at what you do, there are others who aren’t in the same position as you, so you should use your position and your platform to help others. Why do you feel it's important to have role models and mentors?
Having a positive role model is important, as it influences our actions and it can also motivate you to be better. I also feel having a role model is important, as it gives you a standard to aim for and also a standard to compare yourself against. For Black History Month we will be celebrating and featuring a number of our student athletes and sporting Alumni. In our second interview we caught up with NTU Sport Scholar, Adelaide Muskwe, who is currently completing her MA in Interior Architecture and Design. Adelaide is an extremely successful athlete having played in the Netball World Cup and represented Zimbabwe.

Adelaide has also recorded a short video on what Black History Month represents to her, which is available to watch on our NTU Sport Instagram page.

I enjoy that netball is a team sport, compared to Tennis.

What is your greatest sporting achievement?

Performing at the Netball World Cup Liverpool 2019. Received my first 2 Caps for Zimbabwe at the World Cup.

It’s a celebration of our culture and our history as black people. Highlight the endless achievements of black people. Those that fought during the civil rights movement our ancestors that persevered during a time when they were continually knocked down by oppressors. Education everyone on the great contributions black people have had in history.

Strong black women, that always stand up for what they believe, making their own positive mark on the world. 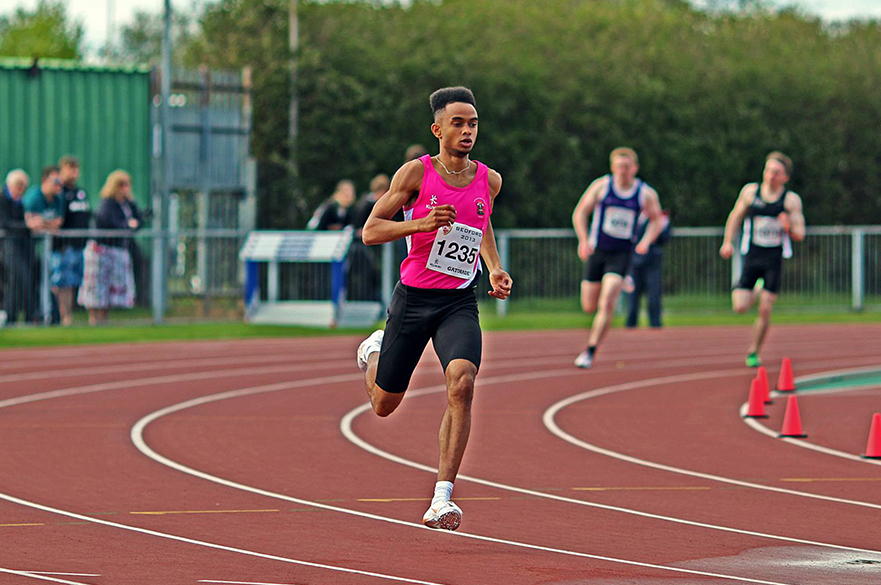 For Black History Month we will be celebrating and featuring a number of our student athletes and sporting Alumni. In our first interview we caught up with NTU Sporting Alumnus Christian Byron, who graduated from NTU in 2016. Christian successfully represented NTU at a number of competitions and has also represented England at an international level.

Christian has also recorded a short video on what Black History Month represents to him, which is available to watch on our NTU Sport Instagram page.

I remember seeing Formula 1 on TV as a child and developing a fascination with the idea of competitive racing. After quickly realising an F1 car wasn’t going to be on my Christmas list, running around as fast as possible at any given opportunity was the next best thing. I had no idea what athletics was as a child, because it wasn’t something anyone in my immediate family had done before. It was nice just to enjoy it for what it was at the time. Many of my break times in primary school were spent challenging older pupils to races in the playground. This raw passion for running eventually lead to me joining my local athletics club, Birchfield Harriers! I still compete for them to this day.

Running is true freedom; it's a creative expression, in my opinion – your own work of art. The competitive nature of the sport helps to get the best out of you and is what sparked my interest in athletics. The sense of accomplishment you feel after a tough training session or a good race is an incredible feeling.

What is your greatest sporting achievement?

Representing England in the 4x400m and 800m at international competitions. It was also great to contribute to the success of NTU Sport by winning four 400m BUCS medals for the University.

Did you face any barriers during your time playing sport?

Athletics is an individual sport; funding isn't always readily available, so having accessible support resources is essential – especially when you're facing the added challenge of academic studies. NTU were there at every step of the way to help me overcome any barriers caused by injuries and be at optimum performance for competitions. The tailored strength and conditioning programme and physiotherapy I received at the University helped to address a number of issues which could have significantly halted my progress as an athlete.

Racism isn't going to go away overnight. Yet, we are making significant progress in forcing global changes in legislation, calling out discriminatory behaviour and providing fair opportunities to those who deserve it. We currently have the physical resources, digital capabilities and global support required to tackle this challenge – the momentum must be continued!
This Black History Month is also Black Future Month for me. It provides an opportunity to take on two of the most significant barriers to racial equality in my opinion, prejudice and ignorance. People are scared of what they don't understand and are less likely to take action against something which doesn't affect them. This change starts in the education system; we need a full representation of British history in the national curriculum. By encouraging respect for other cultures and not accepting even 'casual' racism, we can all do our bit to make a change. Don't think your input won't make a difference!

I have a lot of respect for Lewis Hamilton. He is standing up against racism and helping to get across an important message within an environment where he could easily step back, keep quiet and follow the status-quo. Stormzy has donated £500,000 to fund educational scholarships for students from disadvantaged backgrounds and will provide £10m to black British causes over the next ten years. Again, it's not just about the amount of money, but the fact that he is choosing to use his platform for sustainable change that makes this inspiring.

I take influence from their ambition! Athletics is a sport in which you have to stand up for yourself with conviction in your actions regardless of what others around you are doing. That passion for being and doing better is highly influential and carries over into my daily 9-5 work too.

It builds confidence when you see someone else coming from your background who was in a similar position to you achieving in their given field. It's vital that we all have something to aspire to! Sometimes you need to see it to believe it.
I think with 'role models' it's key to understand that you don't have to be just like them to be great. Underestimating the worth of being the best version of yourself and taking the qualities you possess for granted are big mistakes!

What advice would you give to your 18-year-old self?

University is going to be brilliant! It will provide opportunities and experiences you couldn't have imagined. Use your time wisely and make the most of what you can get while you still can.