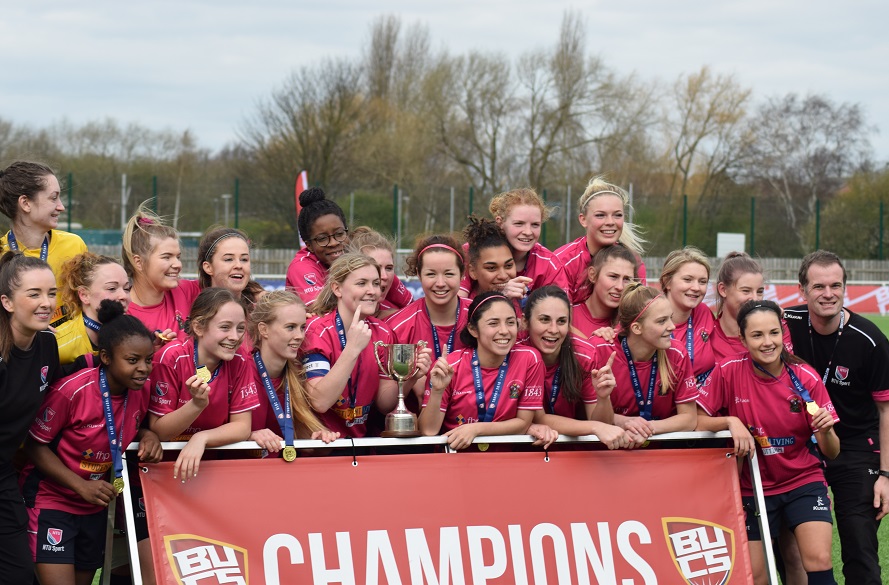 Credit: BUCS
Performance Football
Come and join in the most popular women’s sport in England! We have four teams catering for all abilities and levels of experience, all of who play games against other universities.

Our 1st, 2nd and 3rd teams play in BUCS, the national inter-university competition, whilst the 4th team plays out of competition games against other local teams.

All teams have weekly coached training sessions and there is the potential for players to progress between squads as the season progresses.

All our teams have been successful recently, winning at least one league title each since 2014, including the 1st team winning their league already in 2018/19.  We also have players who play at a high level externally for clubs such as Derby County, Aston Villa, Nottingham Forest, Loughborough Foxes, Tottenham Hotspur and Notts County.

Our 1st team is coached by Jenni Foster and Daniel Corlett. Jenni is a UEFA B candidate who is also an NTU Alumni, having graduated in 2014. Prior to joining us she spent three highly successful years coaching the female program at Go Pro Sports Dubai Academy in the United Arab Emirates. Daniel Corlett, UEFA B Licence with 10 years’ experience of working in the women’s game, including at Derby County and Leicester City Girls Regional Talent Centres.  In his seventh year working at NTU this is Daniel’s third year coaching the Women’s Football program and his first with the 1st team, having coached the 2nd team previously, guiding them to a football league title and a futsal league and cup double in 2017/18.

The 2nd team is coached by Jack Cowdell.  A recent graduate from University of Bath Jack also worked with the women’s football 2nd team at Bath while he studied there, guiding them to successive mid table finishes.

Our 3rd team coach is Nikki Ottley de la Salle.  Whilst this is Nicki’s first year coaching in senior football she joins us with a rich football pedigree having played for Chelsea, Charlton Athletic, Southampton and Bristol City, along with representing England at youth level.

We also hold a 4th Team session on the Clifton Campus 3G pitch every Thursday afternoon 4pm-5pm which is open for anyone to attend, regardless of ability or experience.

We welcome applications from all players, which will the be assessed for suitability for a scholarship award.  Further details on scholarships, including the application form, are available at www.ntu.ac.uk/sportscholarships.

The majority of our player intake takes place through the trials we hold each year during Welcome Week. However, we have also taken on players later in the season who have attended 4th team sessions and shown that they have the ability to join one of the BUCS sides.

The cost to join the club for the season is £110, which helps to cover our coaching and match official costs for the season.  After that the only other items a player is required to buy is playing kit. All players who represent the club in BUCS will need to buy playing shirt, shorts and socks when they join (the cost of the shirt is subsidised by the department), which will then be theirs to keep. Memberships purchased at any point during the academic year are only valid until the end of term 3.

If you are interested in joining the club please email our Head Coach, Daniel Corlett (daniel.corlett@ntu.ac.uk) or message our socials.