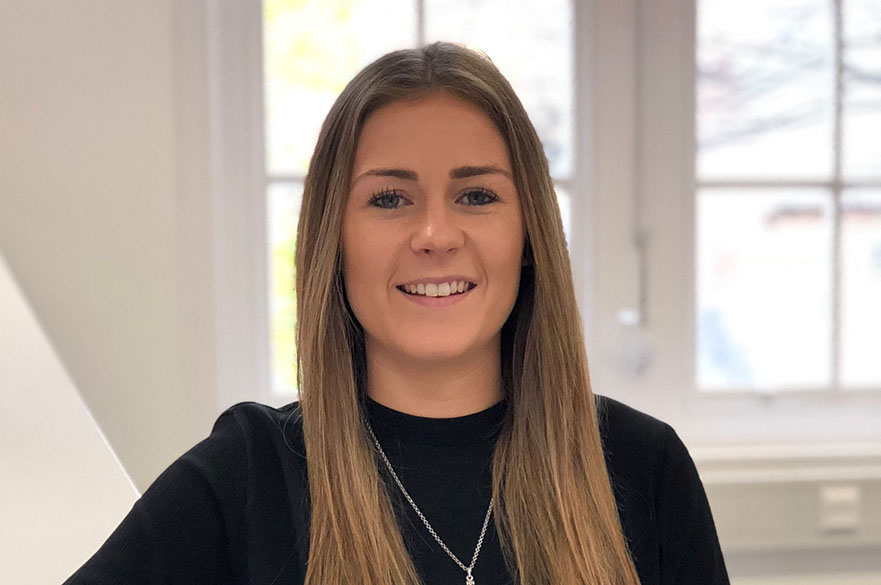 I’m surrounded by a lot more women in the industry now, and through my work as a mentor and a Fellow, am committed to encouraging many more to join us

Kelly Humphries is an architectural technologist at Pick Everard, a consultancy practice working within the property, infrastructure and construction industry.

Being an architectural technologist sounds really impressive, but what does it involve?

“I do the technical drawings, putting the building together once the architect has the design but still working alongside them. We handle the design, assist with interiors, elevation, that sort of thing.”

Kelly studied Architectural Technology here at NTU back in 2013, graduating in 2017. Was her route to what she’s doing now a smooth one?

“I took a placement. So you do two years, go into industry for a year, and then come back for your final year.

“I worked at NTU’s Estates department for my placement. It was a great start, and since then I’ve worked at a couple of architectural practices, building up my knowledge and experience. The thing with this industry is that unless you practice, there’s only so much theory you can learn without actually doing it.”

Kelly is an active NTU alumni Fellow. Very active in fact. How did that come about?

“When I worked at my previous company, one of the things that helped after graduating was networking – in my case, that was every other Thursday night in Nottingham. I also went back to help on my old course – doing mock interviews, and reviews of the different stages of work produced for final year major study projects that go on show for their degree shows.

“Then someone said, look, you’re already doing a lot and seem to be getting a lot out of it, why not become a Fellow?

"I was also attending various Women in Construction events – something I feel very passionate about – and as a woman working in construction, am especially keen to encourage others to do so."

So what does Kelly’s commitment to being a Fellow look like?

“In addition to doing things like mock interviews, I’ve been mentoring a number of undergraduates. I’m also hoping to deliver a Women in Construction presentation next year. I took a Women in Leadership course with Nottingham Business School in 2021 and am keen to apply what I learned there. I’ve also attended various university open days, where I've given presentations about my experiences in the industry since graduating."

Did Kelly have her own mentor as an undergraduate? And if not, would she have liked one?

“When I look back, it would have been good to speak to someone who had the experience of being a woman working in construction. Had I had someone like that to talk to when I was a student, it would have helped me to have more confidence and know if my approach was correct.

“For me, it’s about being able to pass on what I’ve learned and help the next generation coming into the industry to become successful, or even just to answer their questions.”

Encouraging more women to succeed in the construction industry is clearly a passion for Kelly. Where does that come from?

“Attitudes are changing. When I was on my first project, I walked into the site cabin and was the only woman there. I became used to that, but we are making progress within the industry, I’m surrounded by a lot more women in the industry now, and through my work as a mentor and a Fellow, am committed to encouraging more to join us.

“I want to say ‘look, it doesn’t matter if you are male or female in this role – you shouldn’t feel uncomfortable because it’s a great industry to be part of.”

Does Kelly feel the future of construction is in safe hands? Has she been inspired by some of her mentees?

“Going to the events, to the degree shows, you see their work, and they’re doing brilliantly. They’re out there using their initiative and come back at you with mature ideas and well-developed solutions. There was a situation recently where an undergraduate came to me with details of a system I’d never heard of. It was – ironically – for a glass ceiling. They educated me there, and used it on their project and made it work perfectly.”

If you've been inspired by Kelly’s story, visit our Alumni and Industry Fellowship Programme information section to find out more.