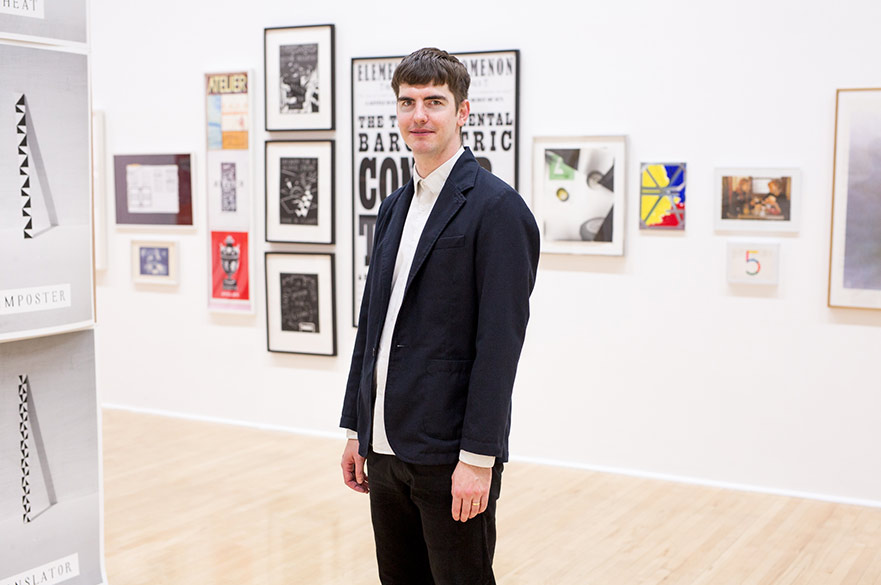 Joshua Lockwood-Moran is the Assistant Curator of the Bonington Gallery at Nottingham Trent University.

Joshua Lockwood-Moran studied Fine Art at Norwich University of the Arts from 2009 – 2012. During this time he assisted curator Lynda Morris on a range of exhibitions & projects including the solo exhibition Jean Genet by Marc Camille Chaimowicz at East Gallery, Norwich (later at Nottingham Contemporary and Focal Point Gallery, Southend) and Morris’ participation within Alan Kane’s solo commission Home for Orphaned Dishes at Whitechapel gallery, London. He also worked as a gallery assistant at Outpost Gallery in Norwich from 2010-2012.

In 2013 Joshua moved to Nottingham and assisted Tom Godfrey with the setup, launch and onward directorship of TG, a gallery based within Primary, Lenton. TG works with artists in a longer-term capacity on a range of gallery-based exhibitions as well as publications, international art fairs and off-site projects. Since opening in 2014, TG has gained a strong international reputation for its programming and has been reviewed in magazines and journals including Frieze, Art Monthly, The Quietus and The Wire.

Alongside TG, Joshua has worked as a freelance curator, working on exhibitions in a number of artist-led spaces and institutions. These include All Men by Nature Desire to Know at Bonington Gallery (2017) featuring Stefania Batoeva, Flora Klein, Alan Michael and Audrey Reynolds; Viewpoints at The Collection and Usher Gallery, Lincoln (2015) and The 8 Artistic Principles, Attic, Nottingham (2014) featuring Benjamin Brett, Jack Brindley, Alice Browne and Jess Flood – Paddock. From 2015-16 Joshua curated an annual programme of 5 film screenings that featured artists including John Latham, Benedict Drew, Laure Prouvost and Peter Wächtler. During this time Joshua began supporting Bonington Gallery as a curatorial researcher, assisting the newly appointed curator in the development of a future programme that included exhibitions with Foxall Studio, Giorgio Sadotti, Landfill Editions/Mouldmap & Sara MacKillop.

In 2017 Joshua enrolled on the Art Museum and Gallery Studies MA programme at the University of Leicester where he was awarded the Susan Pearce Prize for the highest achieving research project, titled Art as a Behaviour: How can Art Engagement be Understood Through an Evolutionary Lens. The final year curatorial project saw Joshua and his fellow cohort present a group exhibition in association with Arts Council Collection of works by artists including Alan Reynolds, Eduardo Paolozzi & Howard Hodgkin.

Joshua joined the team at Bonington Gallery as Assistant Curator in December 2018. Since his appointment he has begun the establishment of the Bonington Gallery Archive, with the aim of building a publicly accessible resource that contains over 50 years’ worth of exhibition and organisational documentation. Joshua works on all aspects of the gallery schedule and is developing an ongoing public programme in support and expansion of the gallery exhibitions. He also feeds into the Student Curatorial programme ran by the gallery, that is made up of 10-12 students from a range of subject areas and qualification levels.

In Summer 2019 Joshua was selected as one of twenty candidates for Nottingham Contemporaries ground-breaking independent study programme CAMPUS that commenced in Autumn 2019 - June 2020.

Joshua is a co-director of TG

and is a resident of Primary